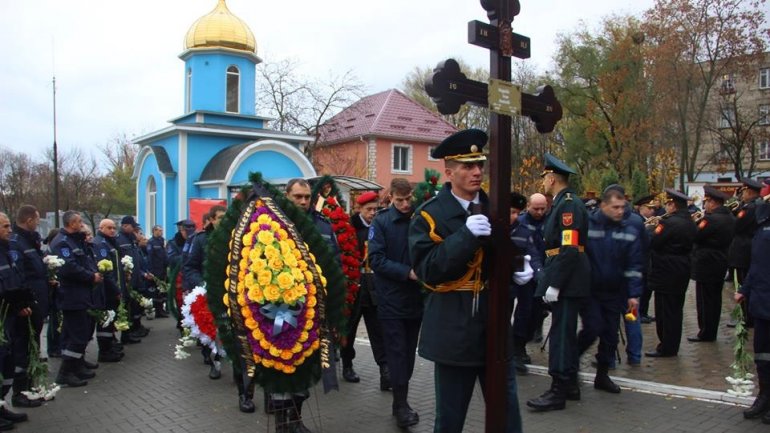 Military honors for the hero Ivan Nagailic, fallen on duty in the fire on Uzinelor street.

Firemen and rescuers from the entire country, and the prime minister Pavel Filip came to give their farewells to the hero.

The ceremony took place at the church placed in the courtyard of the Civil Protection and Emergency Situations Service.

His colleagues recall that Ivan Nagailic was not thinking much before challenging the deadly power of the fire:

"He was a leader, with the initiative to save people, and with no doubt he was decided."

"He was devoted to his work, courageous. This was proved through his sacrifice."

"He was very courageous, to sacrifice your life while saving the lives of other people. Another type of courage cannot be in this life."

According to the Civil Protection and Emergency Situations Service, Ivan Nagailic was a true fighter.

"We employed a boy, a young man, a rescuer, and regretfully I have to send him home in a coffin, that is why I asked forgiveness from his parents that we could not protect their child. Unfortunately, God takes the best of our people" said the head of the Emergency Situations Service, Harabagiu Mihail.

The prime minister Pavel Filip went to the church of the Civil Protection and Emergency Situations Service. Previously, the prime minister requested the Government to give the firefighter the highest posthumous distinction in Moldova.

In his home village, Ivan Nagailic is a pride. The villagers recall him as a boy of rare kindness and selflessness.

Meanwhile, hundreds of people mobilized themselves and gathered over 20,000 euro for the firefighter's family.

Also, in the polling stations abroad were set up donation points. Ivan Nogailic will be buried tomorrow, 14 November 2016, in his home village, Puhoi, Ialoveni district.