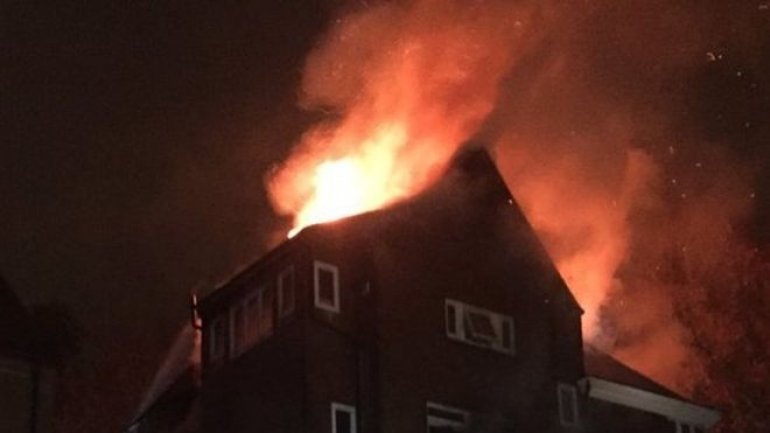 A woman has died after a huge blaze tore through a block of flats in north London.

Eight fire engines and 60 firefighters have been sent to the scene in Hampstead after flames engulfed the second and third floor of a four-story building.

Pictures from the scene showed bright red flames lighting up the night sky as crews battled for hours to bring the fire under control.

Firefighters rescued a woman from the building but she was pronounced dead at the scene, the London Fire Brigade said.

At least 20 other people had fled the building before fire crews arrived at the blaze in Daleham Gardens, after the alarm was first raised at 1:52 am local time.

One woman said her daughter and son-in-law had taken a taxi to hers for refuge after rushing out of the building with just pajamas on and no shoes.

Motorists have been advised to avoid the area as crews continue to deal with the fire, which was brought under control just before 5 am local time.

The cause of the fire is now under investigation, a LFB spokesperson said.

A LFB spokesperson said: "Eight fire engines and around 60 firefighters and officers were called to a fire in a block of flats on Daleham Gardens in Hampstead during the early hours of this morning. An aerial appliance is also being used to help fight the fire

"Crews rescued a woman from the building but sadly she was pronounced dead at the scene. Around 20 people left the flats before the Brigade arrived.

"The fire damaged part of the first, second and third floors of the four story building, as well as its whole roof."

They added: "Motorists are being advised to avoid the area while crews deal with the incident.

"The Brigade was called at 01:52 am local time and the fire was under control at 04:52 am local time. Firefighters will remain at the scene damping down into the morning."