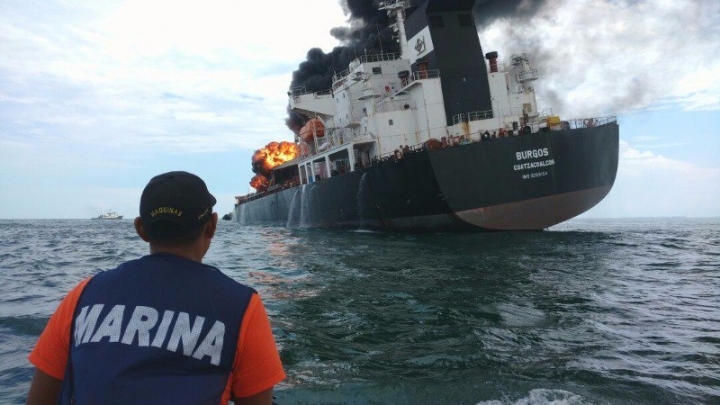 A fire broke out on an oil tanker of Mexican state oil company Pemex in the Gulf of Mexico on Saturday, forcing all the crew to be evacuated in the latest accident to plague the struggling firm, reports The Guardian.

The blaze on the tanker Burgos occurred off the coast of Boca del Rio in Veracruz state and all the crew were safe, Pemex said in a tweet. Mexico’s Navy said there were 31 crew members and that all had returned to port.

Images tweeted by Pemex showed the vessel giving off plumes of smoke as another boat hosed the tanker.

Early on Saturday evening, Pemex said firefighting teams were still working to put out the blaze.

The fire follows a series of other mishaps at Pemex, which is coping with major losses, increased competition at home, sharp budget cuts and lower revenue due to the oil price rout.

In April, more than 30 people died and dozens were injured in an explosion at a petrochemical plant in southeast Veracruz state, a joint venture between Pemex and another firm.

In 2013, at least 37 people were killed by a blast at Pemex’s Mexico City headquarters, and 26 people died in a fire at a Pemex natural gas facility in northern Mexico in 2012.

A 2015 fire at a Pemex platform in the Bay of Campeche affected oil output and cost the company up to $780 million.

Marine Traffic, a website that tracks vessel movements, showed the 11-year-old tanker en route to the port of Veracruz from Coatzacoalcos in the southern part of the state.