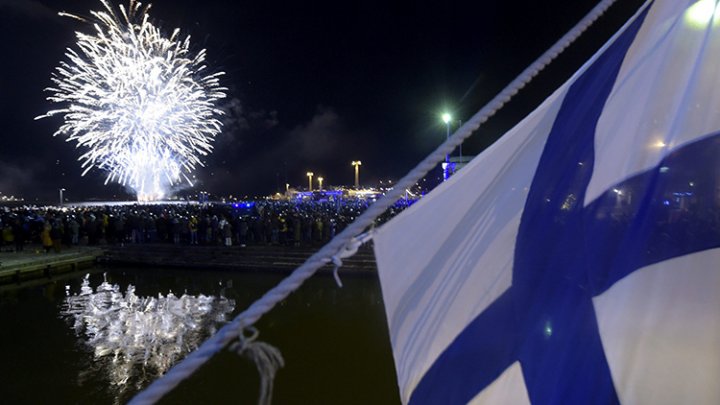 Despite cold weather and long, dark winters, Finland is the happiest country in the world, according to a United Nations (UN) report.

The Nordic nation topped a list of 156 countries ranked in the World Happiness Report on factors such as life expectancy, social support and corruption.

Finland emerged as the happiest place even though its relatively little sun and low temperatures are often blamed for high rates of depression.

It vaulted to the top from fifth place in last year’s report, nudging Norway down into second.

Burundi was named the least happy country. The east African nation is one of the poorest in the world, and has been plagued by ethnic violence and political turmoil for decades.

The UK remained in 19th place, while the US slipped four places to 18th.

For the first time, the annual report published by the UN Sustainable Development Solutions Network also evaluated 117 countries by the happiness and well-being of their immigrants.

In 2015, more than a million migrants entered Europe, and a few thousand made it to Finland, a relatively homogenous country with about 300,000 foreigners and residents with foreign roots out of a population of 5.5 million.

Finland’s largest immigrant groups come from other European nations, but there also are communities from Afghanistan, China, Iraq and Somalia.

John Helliwell, a co-editor of the World Happiness Report and professor emeritus of economics at the University of British Columbia, noted that all the countries in the top 10 scored highest both in overall happiness and on the happiness of immigrants. He said a society’s happiness seemed to be contagious.

“The most striking finding of the report is the remarkable consistency between the happiness of immigrants and the locally born,” Mr Helliwell said. “Those who move to happier countries gain, while those who move to less happy countries lose.”

Europe’s Nordic nations, none particularly diverse, have dominated the index since it first was produced in 2012. Denmark was placed third this year and Iceland fourth.

“I think the basics are quite good in Finland... our politics and our economics,” said Sofia Holm, 24-year-old resident of Helsinki, the Nordic country’s capital. “We have the perfect circumstances to have a happy life here in Finland.”

Inari Lepisto, 28, also of Helsinki, added: “It’s a great thing to live in the happiest country although it’s snowing and we are walking in this wet snow. Yes, we have many things that make me happy.”

Rounding out the top 10 were Switzerland, the Netherlands, Canada, New Zealand, Sweden and Australia.

Meik Wiking, chief executive of the Copenhagen-based Happiness Research Institute, said the five Nordic countries that reliably rank high in the index “are doing something right in terms of creating good conditions for good lives”.

He said the happiness revealed in the survey derives from healthy amounts of both personal freedoms and social security, which outweigh residents having to pay “some of the highest taxes in the world”.

“Briefly put, [Nordic countries] are good at converting wealth into well-being,” Mr Wiking said. The finding on the happiness of immigrants “shows the conditions that we live under matter greatly to our quality of life, that happiness is not only a matter of choice.”

The United States was 11th in the first index and has never been in the top 10. The report cited several factors to explain its falling ranking.

“The US is in the midst of a complex and worsening public health crisis, involving epidemics of obesity, opioid addiction, and major depressive disorder that are all remarkable by global standards,” the report said.

It added that the “sociopolitical system” in the United States produces more income inequality - a major contributing factor to unhappiness - than other countries with comparatively high incomes.

The US also has seen declining “trust, generosity and social support, and those are some of the factors that explain why some countries are happier than others,” said Mr Wiking.