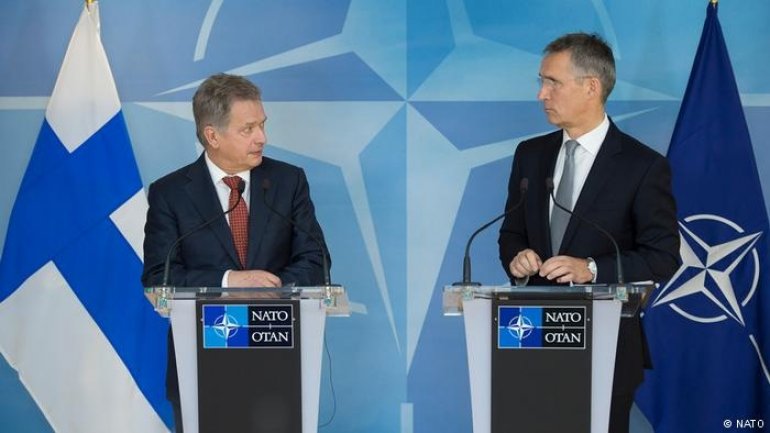 If one Finnish presidential candidate has his way, Finland will upgrade its current NATO partnership to full-fledged membership. But not all Finns back the idea — and Russia's not-so-friendly statements may play a role.

The Kremlin's new ambassador in Helsinki, Pavel Kuznetsov, issued a dutiful reminder in his first interview since assuming the post early this fall. Speaking in the daily tabloid Ilta-Sanomat over the weekend, Kuznetsov lamented the impression that countries need to "fear Russia". At the same time, the ambassador explained, "everyone understands that the entry of NATO's military infrastructure closer to our borders forces us to take appropriate responses."

But Russia's veiled warning does not mean Finland's politicians are keeping quiet on the subject of NATO. Finnish European parliamentarian Nils Torvalds says that, despite that impressive border, it's time for his country to get past the days where Russia has a say in Finland's defense decisions. Torvalds is running for president as the candidate of the Swedish People's Party, and he's determined to use his campaign for the January 2018 election to make Finland confront its current security position, which he believes would be better assured inside the NATO alliance.

A longtime journalist who's lived in Moscow, Washington and now, Brussels, Torvalds says Finland's past political restrictions were understandable, because when "somebody tried to move [toward NATO] then we got a note from Moscow saying that 'you are not allowed to move'." Ambassador Kuznetsov's recent interview demonstrated that such a Russian reaction is not merely a thing of the past.

But Torvalds insists the debate must nevertheless finally escape its Cold War paralysis. "What I'm trying to tell people here," he said in an interview with DW, "is we have to be able to stand slightly more on our own feet than before. And if we are standing on our own feet, then we are dependent on Europe." Torvalds says German Chancellor Angela Merkel's recent remarks on the future of Europe helped underscore his points.

Finnish public opinion shows the population is comfortable with that trade-off. Recent nationwide polling showed that 21 percent of Finns support joining NATO, while 51 percent are opposed.  Meanwhile, 28 percent demonstrated the epitome of neutrality and wouldn't give an opinion.

In recent years, former Prime Minister Alex Stubb, himself a former MEP, got out ahead of the population on NATO membership, declaring himself firmly in favor. He lost the premiership and even his party leadership after that, though not solely because of it. Nonetheless, Makela said it's a good gamble for Torvalds. "If 20% of Finns are in favor of [NATO] membership, that is much more than the 5%" that would normally vote for Torvalds' party," he said. "Nils has taken a clever stand. There will be no other candidate openly supporting the membership."