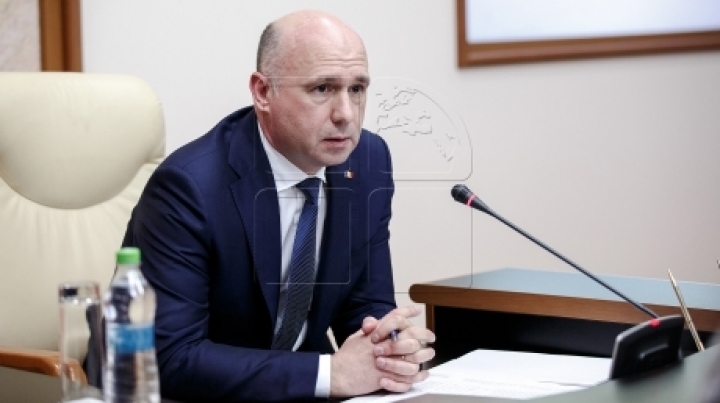 "I come to this public address six months after I assumed the office of prime minister and after five months after I realized the  roadmap for pro-European reform in Moldova. We presented its results on August 1 with the President of Parliament. In the governmental commission for European Integration we have already stated the tasks for the next steps in implementing the Moldova-EU Association. I welcome the fact that the Parliament majority coalition signed with PPEM, a political party in outside of the coalition, the partnership for achieving the objective of European integration, open to other forces pro-European. But I am firmly convinced that we need solidarity more range to ensure the success of the European vector in Moldova. Therefore, I appeal the whole society, ordinary citizens, civic activists, the parties of any color, creative unions, professional associations and other profiles, local communities - our solidarity with all those that unites us is an ultimate goal, the construction of European Moldova! I am confident that we can overcome the consequences of previous crises, time problems, and therefore I think it is the right time to launch, as head of Government, a call for Moldova's future!

I announced the opening several times and I call the partnership again as close as possible between the state and civil society. Beyond working on various draft resolutions, laws and other documents, we intend for Moldovan law to be written "EU State Member"!

Civil society representatives and their critic spirit contributed to the goals of the Roadmap, and the pressure mobilized us to regain confidence of foreign partners towards Moldova. I hope this time I managed to prove my good faith and focusing on concrete results for the country. I understand that there is only one direction: facts for the benefit of citizens in the relation with civil society and facts in the dialogue with external partners. And here we are about to recover at a higher level that we can,the support for Moldova, regional, European and international.

But this time out road is not over, we are facing a new beginning. And, unfortunately, we have a society divided by different political views too and geopolitical interests hidden and growing gaps in the standard of living of the people. That is why I believe that we need a national idea that would unite all people, to provide perspective to overcome differences to show us what to do in the coming years to build a stable and prosperous Moldova. A country that exceed developmental handicaps, modernized state institutions and public services and ensured a civilized living standards for everyone and every family. This country project can be only one - the integration of Moldova into the European Union!
This is the explanation for which the Government has based its program Moldova-EU Association Agreement. Despite the difficulties it is currently going through the European Union gives us values and a model of development, whichMoldova and its citizens also want.

We are now in a period of development of new solutions to Europe's future, given both the UK vote out of the EU and other challenges that confronts the Union, such as migrants crisis or terrorist threats. Therefore we are in a time where we need to express our reality but also to affirm with all confidence our aspirations. It's up to us to prove that Moldova deserves to be part of the project for the future of Europe. This is possible if all those who believe in Moldova's European path will unite their efforts without delay and will be personally involved actively. We need to keep our  diversity and our opinions on other topics, but to have a joint pact and work on the project "European Moldova"!

Therefore, I repeat the call to strengthen all pro-European forces by whole society, to all responsible political forces, but also to every citizen who wants a better future for Moldova! "