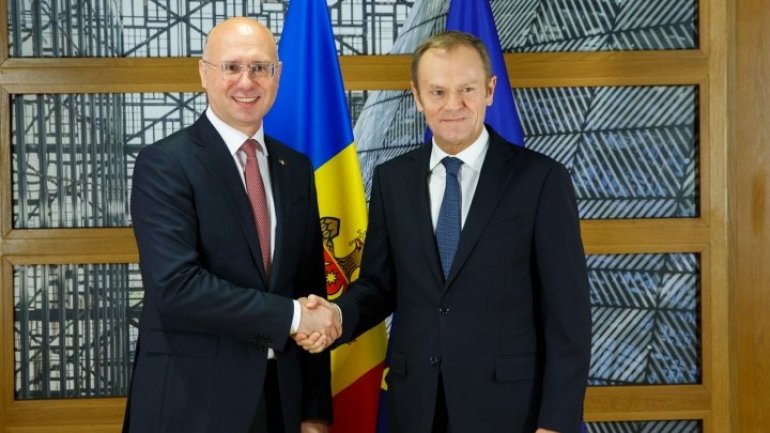 Prime Minister Pavel Filip had a meeting today with European Council President Donald Tusk in Brussels on the sidelines of the Eastern Partnership Summit.

The officials exchanged views on developments in the implementation of the Association Agreement as well as on the domestic situation in the Republic of Moldova. Prime Minister Pavel Filip specified that the stability of the domestic political situation is ensured by the responsible operation of the state institutions, whose efficiency will increase with the completion of the central public administration reform.

At the same time, the head of the Executive reiterated the national political interest aimed at ensuring the stability and the security of the state, as well as the continuation of the European path of the Republic of Moldova. Pavel Filip said that the latest surveys show a increasing people favoring EU integration. In this regard, the prime minister appreciated the contribution of the President of the European Council in strengthening the political dialogue with the EU.

Also, Prime Minister Pavel Filip referred to the Government's main short-, medium- and long-term concerns: ensuring the independence of the judiciary, continuing the investigation of bank fraud and accountability of those involved, adopting the new audiovisual code and implementing it in accordance with the recommendations of the Venice Commission on new electoral legislation. The prime minister specified that all the conditions set for the granting of macro-financial assistance will be fulfilled.

At the same time, Donald Tusk was pleased with the increasing popularity of the EU among the citizens of the Republic of Moldova.