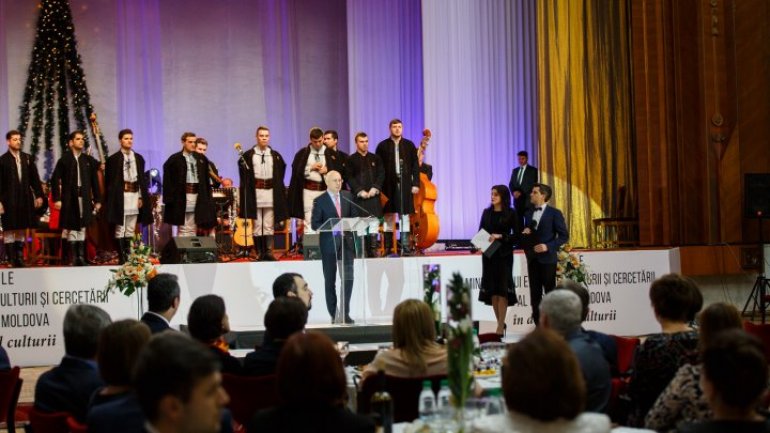 Prime Minister Pavel Filip participated in the Gala of the Annual Awards in Culture 2018, organized on the occasion of the National Culture Day. 14 people with remarkable works during 2017 were honored in the event.

The Moldovan Premier congratulated laureates and emphasized that the National Culture Day as opportunity to promote Moldovan cultural values but also to convey a message of gratitude, cherishing and encouraging to all creators.

"We want to express our appreciation of the most notorious musicians, writers, theater artists, librarians, filmmakers, animators, in addition, we want to reconfirm once again our determination to fully implement the provisions of the Culture 2020 Strategy. These cultures are rightly given the status of national priority," said Pavel Filip.

"Today we celebrate the greatest poet Mihai Eminescu's birthday. It is a happy occasion to recall that culture gives us joy, draws us closer and brings us together.

"At the Annual Awards Gala in the field of culture, we congratulated the laureates and thanked them for their achievements.

"For me, as Prime Minister, culture is a national priority. It is important to improve the working conditions and the remuneration of people in this field, because their creations bring changes in our presence and the future, "wrote Pavel Filip.

According to the Premier, a particular emphasis in the negotiations with external partners will be put on cultural projects. In this context, the restoration of the Soroca Fortress, Manuc's Inn in Hâncești, the National Museum of Art, and the Organ Hall were mentioned.

The National Culture Day is marked annually on January 15, starting in 2012. On this occasion, the Ministry of Education, Culture and Research organizes, during the period 13-20 January, several cultural actions such as exhibitions and workshops, literary- musical and dramatic performances, flowers and tributes to the great poet Mihai Eminescu.