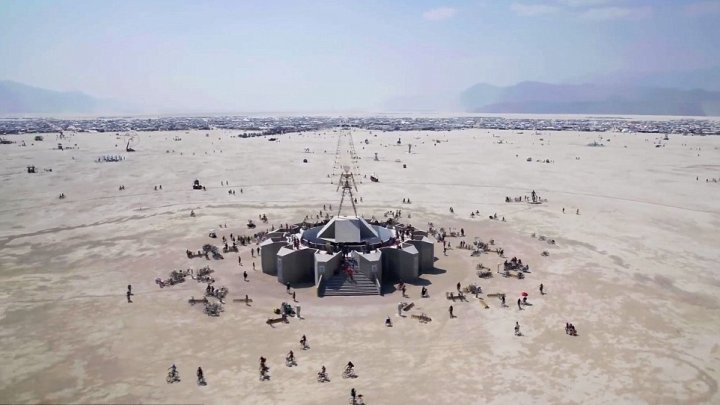 Fascinating drone footage taken above Burning Man shows stunning views of prominent installations at the arts and culture festival as thousands of revelers make their way around the desert by foot and bicycles, writes dailymail.co.uk.

An estimated 70,000 people are in attendance to the eight-day revelry - which sees burners don wild costumes and leave their cash at home for a week of all-night parties in the temporary city known as the playa, north of Reno, Nevada.

Photos from the drone footage show bikers trek around the desert and aerial views of art installations such as the Burning Man Temple.

The festival is scheduled to run through the next Monday with celebrity guests such as the likes of Cara Delevingne and Elon Musk among previous years' attendees.

Burners shared photos on social media this week from the mega-party, showing off nights with lit up bicycles, DJ sets and skimpy outfits.

Tickets for the event went on sale for $1,200 in January. The only items sold within the festival are coffee and ice, with attendees expected to bring everything else they may need.