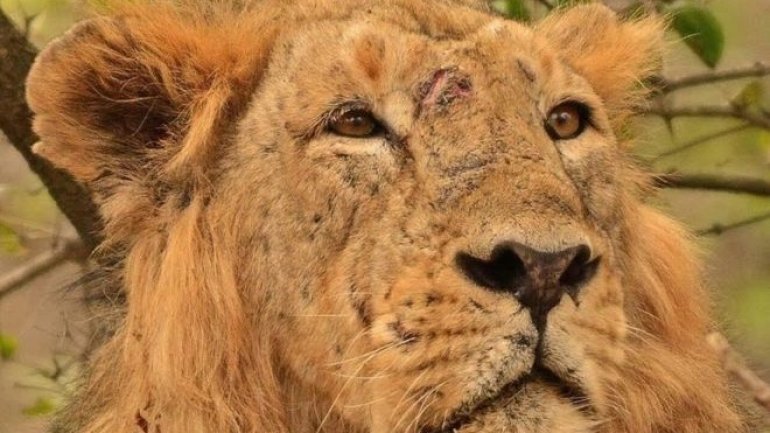 One of India's oldest and most popular lions in the wild has died from old age, forest officials told the BBC.

Ram was found dead on Saturday, officials at the Gir sanctuary in western Gujarat state said. He was thought to be about 15 years old.

Forest officials described him as "beautiful" and "flamboyant" and said Ram was their "most photographed lion".

Gir sanctuary is home to more than 500 lions and is the only habitat of Asiatic lions in the world.

Ram and his brother Shyam were a famous pair of lions that ruled over Gir forest in recent years.

"We carried out a post mortem on him to ascertain the cause of death. He died from natural causes. He was cremated in the presence of government and local village officials." deputy conservator of forests Ram Ratan Nala told the BBC.

Mr Nala said Ram was loved in the neighborhood and many forest staff in the area fasted for a day to mourn his death.

"Ram along with his brother Shyam ruled over Gir for many years and the two fathered many cubs over the years," Sandeep Kumar, who was Mr Nala's predecessor, told the BBC.

"At one point, the duo had about two dozen cubs in their pride," he said.

The forest staff named the lions Ram and Shyam which are popular Indian names and also the name of a hit Bollywood film.

Unlike tigers who do not share their territories with other males, lions generally form a coalition with another male member of their family and the two protect their territory together, Mr Kumar explained.

"But every kingdom must come to an end. With Ram now dead and Shyam getting on in years, it will get very difficult for Shyam to protect their territory and the area is likely to be taken over by other younger males soon," he added.