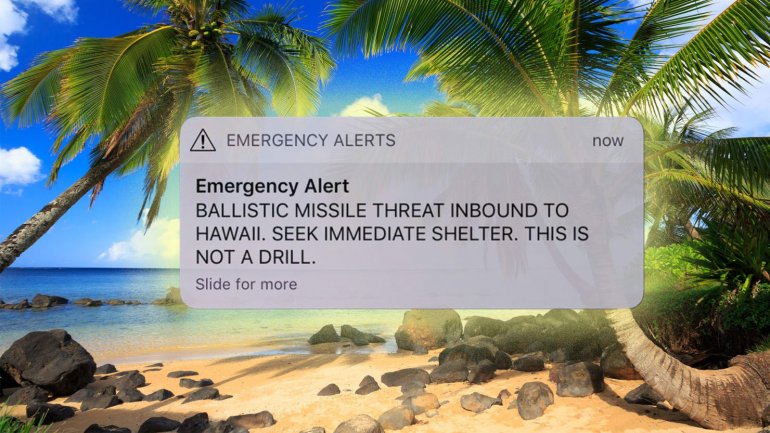 A woman who ran for shelter in Hawaii after receiving an alert about an imminent missile attack has told of tears running down the faces of young children as their parents tried to reassure them, wrote independent.co.uk.

As officials launched an investigation into how the Hawaii Emergency Management Agency issued a warning to cell phones reading BALLISTIC MISSILE THREAT INBOUND TO HAWAII. SEEK IMMEDIATE SHELTER. THIS IS NOT A DRILL, people revealed how they scrambled to take shelter wherever they could.

One resident posted video footage of parents lifting children into storm drains, until officials took another 40 minutes before sending a second alert to say there was actually no threat.

Meredyth Gilmore, an elementary school teacher who moved to Hawaii less than a week ago with her family from Virginia, told The Independent she had ran to a shelter to find that it was locked. She and other military families then sheltered in part of a hotel as they tried to find out if the warning was genuine.

“Basically, I got the alert on my phone and immediately read the part that said ‘This is not a drill’,” said Ms Gilmore, whose son is aged 17-months. “I went outside where husband and son were and told them to get inside.”

She said that as she did so, she could see other people running back and forth. As people gathered, she said people tried to find out if the warning was genuine. One person directly contacted officials as US Pacific Command and was told they were not tracking anything.

“We were military families and we knew it was not good. People were not screaming. Mums were trying to stay calm. The most heartbreaking thing was seeing these little kids with tears running down their faces,” she said.

“Parents were just trying to hold it together for their kids.”

“People were really upset that something like this could happen. They want this fixed,” she said. “People are outraged that this could have happened.”

Governor David Ige said on Saturday afternoon that an investigation was underway and that it appeared human error was responsible for the alert.

“This is a day that most of will not forget. I know this was totally unacceptable,” he told a press conference.

Vern Miyagi, the agency’s administrator, said he took responsibility for what had happened. “We are doing everything we can to make sure this never happens again,” he said.

The alert, sent to mobile phones and aired on television and radio, was issued amid high international tensions over North Korea’s development of ballistic nuclear weapons and sabre-rattling from the US President

Mr Ige said the alert was sent out by mistake during a shift change at the agency. He said such shift changes occur three times a day every day of the year.

The US Federal Communications Commission said it was initiating a full investigation. The FCC has jurisdiction over the emergency alert system. Reuters said that earlier this week, FCC chairman, Ajit Pai, said the agency would vote at its January meeting to enhance the effectiveness of wireless emergency alerts, which have been in place since 2012.

Professional golfer Colt Knost, staying at Waikiki Beach during a PGA Tour event, said “everyone was panicking” in the lobby of his hotel.

“Everyone was running around like, ‘What do we do’,” he told the Associated Press.

The incident prompted the Pentagon and the US Pacific Command to issue the same statement, that they had “detected no ballistic missile threat to Hawaii”.

The White House said President Donald Trump, at his private club in Florida, was briefed on the false alert. White House spokeswoman Lindsay Walters said it “was purely a state exercise”