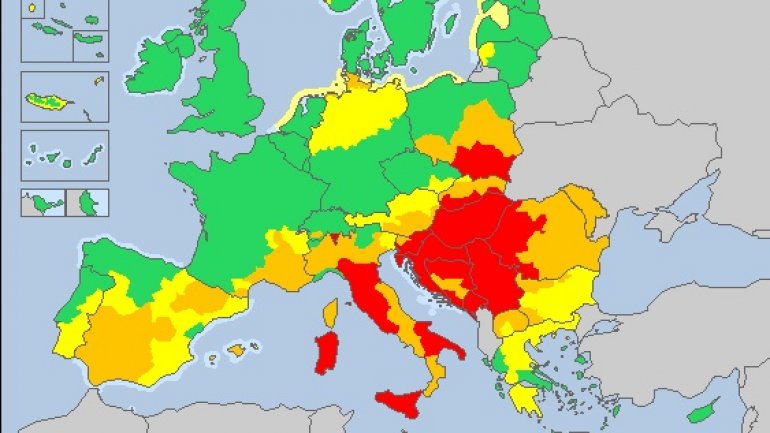 Extreme weather warnings have been issued across Europe as a fierce heatwave dubbed “Lucifer” by the Italian press blasts the region.

The hot air is coming from the Algerian Sahara and has sent temperatures rocketing to over 43C in parts of Spain and Turkey.

As of Friday, European weather hub Meteoalarm has issued the highest grade “red” warnings across 11 countries, including Italy, Croatia, Switzerland, Hungary and Slovenia.

And the group does not mince its words on the severity of the threat level: “The weather is very dangerous. Exceptionally intense meteorological phenomena have been forecast. Major damage and accidents are likely, in many cases with threat to life and limb, over a wide area. Keep frequently informed about detailed expected meteorological conditions and risks. Follow orders and any advice given by your authorities under all circumstances, be prepared for extraordinary measures.”

The effects of the heatwave in Italy mean the country’s grape harvest is having its earliest start in a decade – a full ten days before the last harvest began.

In Romania, where temperatures hit 42C, the weather was responsible for at least one death when a 60-year-old man collapsed in the street and suffered a fatal heart attack brought on by the heat.

The heatwave has also provided optimum conditions for the series of wildfires which have been raging across parts of France causing the evacuation of more than 12,000 people and in Portugal, where dozens of deaths have been reported.

The highest temperature ever recorded in Europe was 48C in Athens in 1977, and this week the mercury has nudged 43.4C in Batman, Turkey, and 42.8C in Cordoba, Spain and Frosinone, Italy.