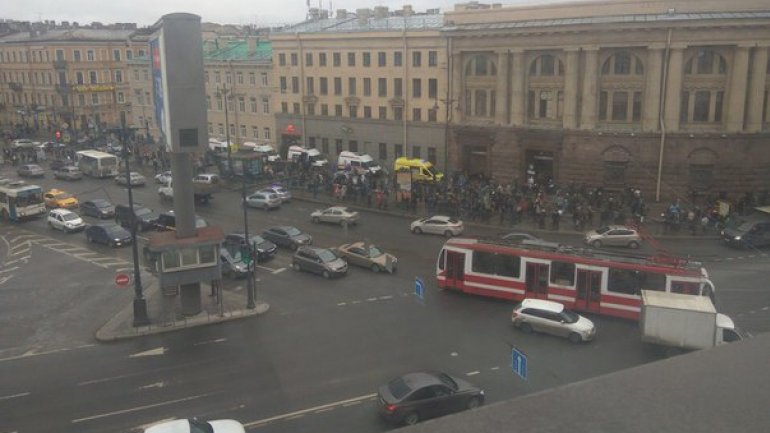 (22:00) The committee said an explosive device was later found and made safe at another station nearby.
Prime Minister Dmitry Medvedev said in a Facebook post that the explosion was a "terrorist attack".
An anti-terror investigation has been opened, but other possible causes are being investigated.

(17:05) 41 ambulances are on the spot. 21 injured were hospitalized. All public transport to be free, according to the press officer of the city mayor.

"There are a lot of people everywhere, near the metro station. Panic is in the air. People are taking pictures. A lot are entering and exiting the station. It is a very terrible sight. I was about to get in the building when everybody started to run outside" , said Alexander, eyewitness.

(16:35) According to BBC, a suspect backpack was found in the metro station. Residents in the near-by are offering free rides. UBER has also offered free rides.

(16:20) The decision to close down the airport was taken. The two explosions in two trains have been confirmed.

(16:04) All people have been evacuated from the metro station.

(15:50) At least 20 people have been injured following the blast, an Emergencies Ministry source told Interfax.

(15:45) Some children have been injured in the explosion, a law enforcement source told Sputnik. "There are children among the victims who were most likely on spring break. However, their number and names are unknown at the moment," the source added.

Some children have been injured in the explosion, a law enforcement source told Sputnik. "There are children among the victims who were most likely on spring break. However, their number and names are unknown at the moment," the source added.

Russian President Vladimir Putin has expressed condolences to the families of the victims.

(15:35) At least 10 people have been killed in explosions at underground stations in St Petersburg, Russian media report.

(15:02) Pictures, showing thick smoke and a damaged train car in St Petersburg Metro have emerged online. Witnesses say that a blast has taken place. There are reports of casualties, rt.com informs.

A law enforcement source told TASS there was a blast at the Sennaya Square metro station. No official confirmation or casualty report was immediately available.