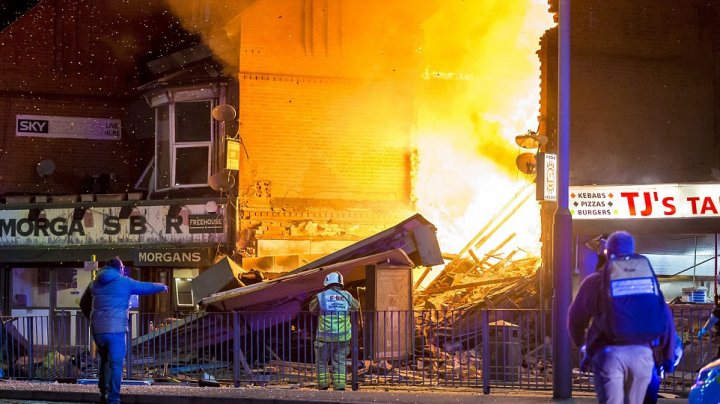 Four people have died after after a huge explosion demolished a grocery store and the flat above it in Leicester.

Passers-by dug through the burning wreckage of Western Park Stores with their bare hands as emergency services raced to the scene, and police said their 'search and rescue' operation to find anyone else trapped in the rubble continued all night.

The cause of the explosion, which occurred at 7:20pm last night while the grocery shop and its neighboring takeaway restaurant and bar were open, remained a mystery today with gas engineers on site and police who earlier declared a 'major incident' saying nothing 'at this stage' linked it to terrorism.

Six people were taken to hospital and police this morning confirmed that four have died, while one person remains in critical condition.

Police and fire chiefs revealed they are still searching for 'missing' people, who remain unaccounted for and may still be trapped in the building.

'Emergency services remain at the scene this morning, searching the collapsed property and conducting enquiries in the area.

'At this stage, there are four confirmed fatalities and four people remain in hospital, one with serious injuries.

Superintendent Shane O'Neill said: 'There are a large number of resources from various agencies at the scene in Hinckley Road and they are expected to be in place throughout the day.

'There are four confirmed fatalities at this stage and a number of people still undergoing treatment in hospital. The building consisted of a shop premises on the ground level and a two-storey flat above it. We believe there may be people who have not yet been accounted for and rescue efforts continue in order to locate any further casualties.

'Once the site is deemed to be safe a joint investigation with Leicestershire Fire and Rescue Service will begin looking into the circumstances surrounding the incident, which at this stage are not being linked to terrorism.'

Electricity to a number of homes was affected by the incident and a cordon was put in place, but no neighbouring properties were evacuated overnight. Matt Cane, Group Manager, said: 'Crews have worked through the night, alongside partner agencies, as they continue to search the scene in order to try and locate any further survivors or casualties.

'We have six fire crews on scene, including a specialist search and rescue team who are supported by two search dogs, and this level of resourcing is likely to be in place throughout the day.

'The cause of the explosion and fire is still yet to be determined and we will work closely with colleagues from the police as our enquiries into the circumstances continue today.'