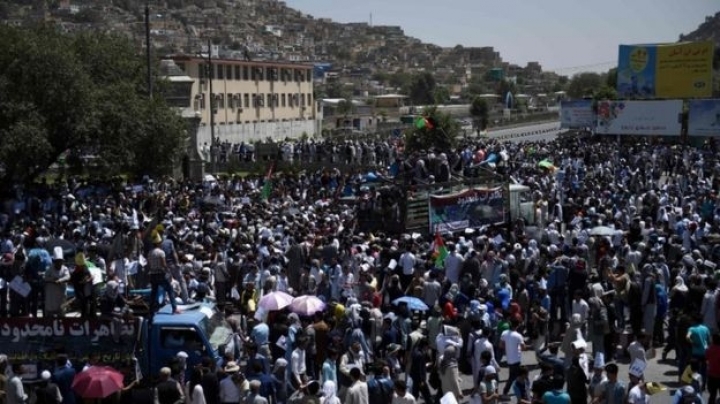 UPDATE 16:20: At least 61 people were killed and 207 were wounded, an official from the Public Health Ministry said.

The deaths are more than double earlier estimates.

"Two fighters from Islamic State detonated explosive belts at a gathering of Shi'ites in... the city of Kabul in Afghanistan," Amaq said in a brief news alert.

15:25: An explosion has ripped through a protest march in the Afghan capital, Kabul, killing at least 29 people and wounding more than 100, officials say.

The blast hit Deh Mazang square as thousands of people from the Hazara minority marched to demand changes to the route of a planned power line, reports BBC.

They are angry that the route bypasses areas with large Hazara populations.

The cause of the blast is unclear, although TV channel Tolo cited reports that a suicide bomber was behind it.

No-one has yet said they carried out the attack.

Taliban spokesperson Zabiullah Mujaheed sent an email to media condemning the attack and saying they were not behind it.

Afghan President Ashraf Ghani said he was "deeply saddened", adding: "Peaceful protest is the right of every citizen, but opportunist terrorists infiltrated the crowds and carried out the attack, killing and injuring a number of citizens including some security forces."

A freelance journalist working for BBC Afghan said blood and body parts were everywhere, with debris strewn around.

A large part of Kabul's city centre had been sealed off for the protest march.

The demonstrators had waved banners and chanted "death to discrimination", angry that the 500kV power transmission line from Turkmenistan to Kabul would not pass through Bamyan and Wardak provinces, which have large Hazara populations.

The Hazaras - mostly Shia Muslims - make up the third largest group in Afghanistan. They live mainly in the centre of the country.

They complain of persistent discrimination, especially during Taliban rule in the late 1990s, when many of them fled to Pakistan, Iran and Tajikistan.