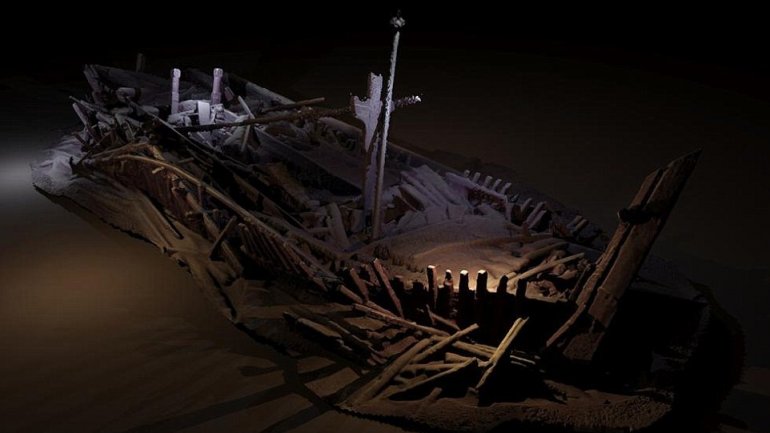 In the depths of the Black Sea lies a landscape of complete darkness, where there is no light and no oxygen.

Now, a mapping expedition has proved them right, after accidentally uncovered more than 40 ancient shipwrecks from the Ottoman and Byzantine periods.

The expedition has been scouring the waters 1,800 metres below the surface of the Black Sea using an off-shore vessel equipped with some of the most advanced underwater equipment in the world.

The vessel is on an expedition mapping submerged ancient landscapes which were inundated with water following the last Ice Age.

The vessel is based on board the Stril Explorer, and carries some of the most advanced underwater survey systems in the world.

One is optimized for high resolution 3D photography, while the other, called Surveyor Interceptor, 'flies' at four times the speed of conventional ROVs and carries an entire suite of geophysical instrumentation, as well as lights, high definition cameras and a laser scanner.

Since the project started, Surveyor Interceptor has set new records for depth at 1,800 metres and sustained speed  of over six knots (7mph), and has covered 1,250 kilometres.

Among the wrecks are ships from the Ottoman and Byzantine Empires, which provide new information on the communities on the Black Sea coast.

Many of the colonial and commercial activities of ancient Greece and Rome, and of the Byzantine Empire, centred on the Black Sea.

Professor Adams said: 'The wrecks are a complete bonus, but a fascinating discovery, found during the course of our extensive geophysical surveys.

They are astonishingly preserved due to the anoxic conditions (absence of oxygen) of the Black Sea below 150 metres. Using the latest 3D recording technique for underwater structures, we've been able to capture some astonishing images without disturbing the sea bed.

We are now among the very best exponents of this practice methodology and certainly no-one has achieved models of this completeness on shipwrecks at these depths.'