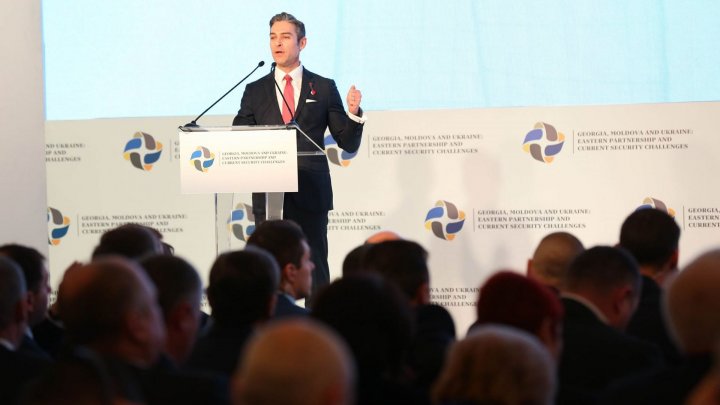 We wish for a world of freedom, therefore Atlantic Council of the United States is carefully watching over Moldova, Ukraine and Georgia, who wish to become part of our family. The declaration was made by Damon Wilson, executive vice president at the Atlantic Council of the United States, who is participating today at the inter-parliamentary summit "Georgia, Moldova and Ukraine: Eastern Partnership and current security challenges".

"We all come from democratic countries, each fighting its own battlefield, tied to democracy. If we speak of strategy, then there is much that ties us. We wish for a world of freedom and we, Atlantic Council of the United State are carefully watching over Ukraine, Moldova and Georgia. You input much effort, which bears a deeper meaning than our agenda from today, Atlantic Council of the United States wishes to use this forum to speak of strategy and discuss of what conflict means in a modern world. This region was always filled with tension, including tension with Russia, it is great that your countries chose a path to eliminate those conflicts. Russia denies any responsibility, do you remember what Mr. Putin said yesterday? It is also very important for our summit. We follow a strategy for many years now, for Europe to be at peace, free and unified, which depends on a strategic partnership, including with Russia, since 1945 we passed through Cold War, it speaks about how complex is the situation in Europe. This strategy that we speak of is successful. We thought of this Eastern Partnership, it is very important to help carve a path for those countries" Damon Wilson said.

At the same time, executive vice president at the Atlantic Council of the United States also declared that Europe has to have freedom, peace and unity:

"Atlantic Council of the United States can speak of this strategy and philosophy. There are some important steps the Eastern Partnership has to take, to gain freedom which already bears fruits. We hope that history will never repeat itself. U.S. promoted a strategy for unity, on another hand one tied to European countries. Now we speak of a different relation- Ukraine, Moldova and Georgia, due to them wishing to become part of the European Union. We hope that the discussion which begun today in Chisinau will not end here and we will continue to discuss how we can improve this strategy to support the aspirations of Georgia, Ukraine and Moldova, who wish to become part of our family."

Republic of Moldova and Georgia established diplomatic relations on June 25 1992. In April 2014, Presidents of Parliaments from Chisinau and Georgia held first official meeting. In June 2017, Presidents of Parliaments form Moldova, Ukraine and Georgia have requested the European Parliament to bring into force a resolution with clearly stated perspectives on those three countries to speed up the democratic transformation and progresses.
AFLĂ imediat Știrile Publika.MD. Intră pe Telegram