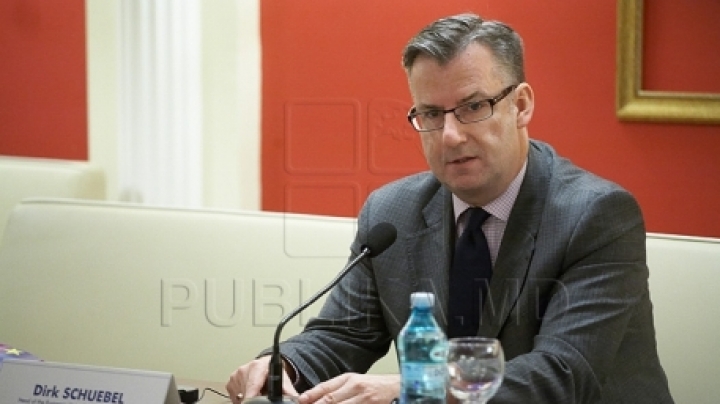 At the end of EU ambassador mandate in Moldova, Dirk Schuebel left with a bitter taste. It happened in 2013 whenpolitical crises have already begun in our country. Now he is optimistic about the future of Moldova, especially as the government has implemented the Association Agreement.

We are talking about Dirk Schuebel, head of the Eastern Partnership countries Department for the European Action Service. From Bruxelles, he agreed to give an interview for Top News on Prime answering questions of journalist Dorin Ţurcanu.

Journalist Prime TV, Dorin Turcanu: "Thank you for your intervention and for your time. Between 2009 and 2013 you were Head of EU Delegation in Moldova and witnessed events that put our country on the EU path. How do you find Moldova in 2009 and with what thoughts you have our country in 2013?"

"First of all, thank you very much for inviting me. I am happy that I can talk to you, but first of all I would like to address Moldovan people to congratulate them with the 25th anniversary of the Independence of the Republic of Moldova, which is an important event and a time to learn success and failures lessons.

In 2009, when I came to MoldovaI could feel the excitement of a new situation, a new management agreement of the coalition that have a clear ambition to move towards Europe, but also to take needed steps to move closer to Europe. It was a very positive atmosphere that I really felt it. I also think that during my presence in Moldova, I have registered quite a few achievements. We obtained a liberalized visa regime with the EU, which is a remarkable success. If we look now how difficult it is for Ukraine and Georgia to get the same thing, then you can imagine what effort has been made at that time. And of course, the EU Association Agreement was negotiated and later initiated and signed, which was also a great achievement. When I left Moldova in 2013 I had mixed feelings. On one hand, of course, I felt and I thought achievements that I have mentioned are good, wonderful and positive. And there are some very positive steps. It was evident then that the implementation will not be easy and we saw the first problems in the coalition, which did not work very well, as you know. So I left Moldova with a sort of bitter taste that not everything worked and functioned as it was supposed to work. That is why, while leaving, my feelings were a little confused and were not as good as those relating to our enthusiasm around the end of 2009. "