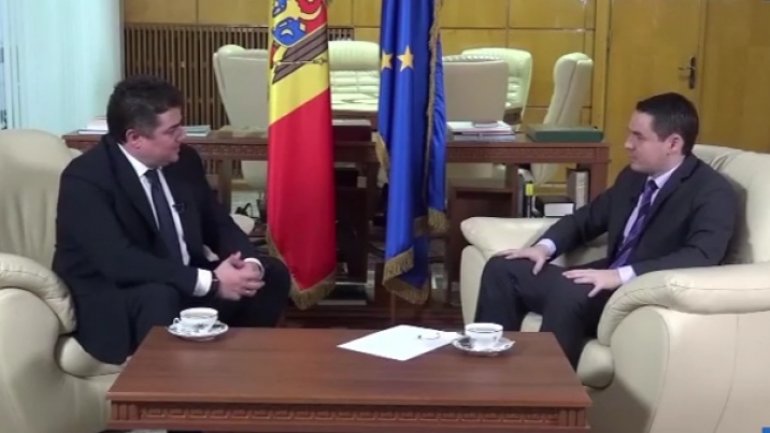 In an interview for Publika TV, Economy Minister Octavian Calmic has pointed out that in 2016, immediately after the Cabinet had been inaugurated, it started to cope with a series of domestic and external challenges:

-- The first one has been the bank crisis, that we inherited, and we had to solve a series of keen problems in economy, in society. Starting from paying off the salaries, pensions and all current payments due by the Government.

We also had to improve the economic situation and maintain the investment climate, keeping the businesses in Moldova, because there was a trend of leaving Moldova for other states. My colleagues and I managed to stabilize this situation.

Even more, we managed to open more jobs in the second half of the year, to create investment opportunities, which will be felt in 2017 and the coming years.

External was another challenge: all the donors suspended the promised support. There are many arrears in implementing the Association Agreement, especially the Free Trade Agreement with the EU.

We had communication problems with Russia, Ukraine and Belarus. That is why we had to steer right the foreign course as well.

Speaking about the hardest tasks he has had to accomplish, the deputy premier mentions the negotiations with the IMF:

-- The program with the IMF was the biggest problem, since I was appointed as the key negotiator in a team with the Finance Minister and the BNM governor. I think this is the best accomplishment in 2016: we have managed to secure a deal with the IMF.

Connected is solving the problems in the energy sector. It’s a real chance that Moldova has alternative to both electricity and natural gas. We will start having supplies from the European space in 2019.

We’re now in the projecting period, we have all the financial coverage to implement these projects. Besides, the private sector is keenly interested to involve into theses processes.

In addition, there is a series of improvements in the investment climate. These pivotal laws were backed by the Parliament. The doing business procedures got simplified.

The number of permissive acts for businesses has been decreased: 115 acts in the first stage. Now we’re preparing to remove other 200 permissive acts.

The controlling agencies got reformed: a moratorium on controls was set. We have kept communicating with the businesses and we try to persuade them we stay by their site, it’s a pro-business, pro-investment Government and we find the adequate solutions.

Referring to failures, Octavian Calmic points out the relations with Russia:

-- The biggest failure in 2016 is not managing to re-establish our relations with the Russian Federation. They did not have enough trust in our steps. Maybe we have not been persuasive enough, although now we are confident we’ll manage to overcome all the problems shortly.

I think it’s been one of the constraints hindering us to have a bigger economic growth than the one mirrored in the economic statistics. It’s one of the failures, but I think we’ll manage to overcome it with joint efforts at all levels.