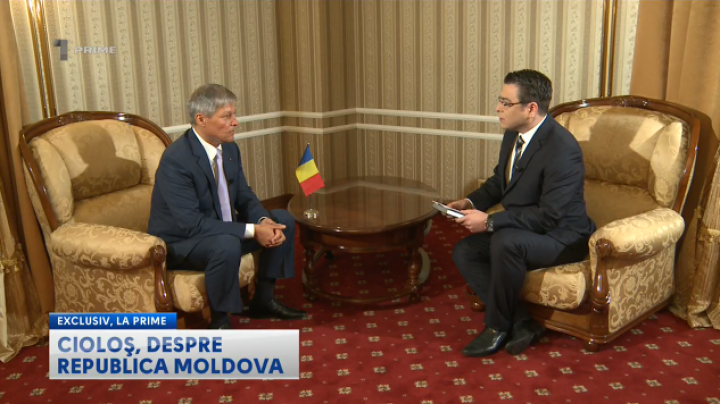 Dacian Ciolos, Romanian prime minister: Moldova is a special partner for Romania. And this is not since yesterday or today. But we want stability, prosperity, development in Moldova in a very pragmatic way. The interest of Moldovan citizens is the interest of Romania. For this are necessary reforms. Moldova requested this loan from Romania. Romanian decided to give it. And we wanted to use this loan as a lever, not only for direct support through this loan of the economic and social development in Moldova, but also to reinstall the faith in the reforms process in Moldova in comparison with international financial institutions. This was the reason why we decided to give this loan to Moldova, in order to finance various reform and economic and social development projects. It is a loan given directly to the Government, so that the Government decides which are the priority directions for financing, but from another side, I have linked this tranche to a series of measures we discussed with the Moldovan Government, and mostly there were also the requests of people who, a few months ago were on streets asking for continuation of reforms. Today, not only this money, this first tranche, is on the accounts of Moldova, also Moldova is almost finishing an agreement with the International Monetary Fund, which is important not only from the perspective of the loan coming from IMF, but also for the investors to restore the trust in the economic environment in Moldova. There are reforms which have started, which have to continue, but there are first important steps to be done.

Dorin Turcanu, Prime TV journalist: Giving this loan was conditioned by Romanian Government. Which of these conditions were fulfilled by the authorities from Chisinau and when we can talk about the next tranche?

Dacian Ciolos, Romanian prime minister: I wouldn’t call them conditions, because they were measures agreed together with the Moldovan Government. Were measures, as I said, which were requested also by the civil society, by a part of the civil society, by Moldovan citizens. And they were common sense measures which Moldova needed for the restoration of trust in the program of reforms in which it got engaged. It is about the continuation of the implementation of the Agenda with the European Union which foresees some measures presuming improvements of the economic field, of the function of the justice, of the administration in Moldova. It presumed a package of measures ensuring transparence and reform at banking level in order to avoid problems, like it was in the past. It presumed also the improvement of the dialogue between Government and civil society, the continuation of the reforms in justice and fight against corruption. So, there were measures in which Moldovan Government got engaged and we engaged together to ensure ourselves that these reforms are applied before this first tranche got in such a way, so that once it got on the Moldovan accounts, the money would be spent in a more efficient way. It is also the interest of that who gave the loan, and the interest of that who uses the money.

Dorin Turcanu, journalist Prime TV: For many years, there are discussions about the fulfillment of joint infrastructure projects, especially the interconnection of high voltage power lines and the gas pipeline Iasi-Ungheni-Chisinau. For now, the portion Iasi-Ungheni was finished, but its functioning is mostly a symbolic one. When will be done important steps for the fulfillment of magnitude projects and which will help Moldova to obtain an energetic independence, and what other joint infrastructure projects are on the Moldovan and Romanian governments?

Dacian Ciolos, Romanian prime minister: We want to approach in a very pragmatic way the development of economic relations between Romania and Moldova. And we came with very specific offers. There are companies in the energy field which are ready to invest money in Moldova. Not only irredeemable financing for interconnection, how it was and it is until now, but there are companies that are ready to invest hundreds of millions of euro, both to continue the investment projects of Iasi-Ungheni gas pipeline, to reach Chisinau and to connect Moldova to the gas distribution network from Romania. I want to stress out the fact that it is very probable that in a few years Romania will become a gas exporter, and to offer gas in the amount Moldova will need and to help Moldova connect to the European network, because Romania, through Transgaz, is a well-placed state company in the Romanian and European market. Transgaz will participate in the construction of a gas pipeline called BRUA, which goes from Bulgaria, from the Black Sea, Romania, Hungary, Austria, and connects this region of Europe to the rest of the Europe. Thus, this company is ready to invest in Moldova. Also, Transelectrica has a very active presence and will work and works already on interconnection projects for the transport of the energy.  There are three interconnection projects which are still in the discussion phase, one of them having the feasibility study in process. So we want to continue in this direction, but to come exclusively with investments, and here will be according to the Moldovan government the way and the limits of the establishment of some partnerships from this perspective. Aside of this, we discussed today about the constitution of a guarantee fund of Romanian investments in Moldova, which the Romanian Government is ready to financially support, in order to stimulate the Romanian private investments in Moldova. We discussed the continuation of some projects of infrastructure, transport, bridges over Prut river, improvement of the flow at the border with the circulation of persons and goods. Here, the Romanian customs will work with the Moldovan customs in order to facilitate the border crossing procedure. These are the projects we propose to do. Of course, the Government led by me ends its mandate at the end of 2016, but, as I said today, no matter the Government, Romania has demonstrated that it is loyal to a pragmatic approach, oriented towards a visible result for Moldovan citizens.