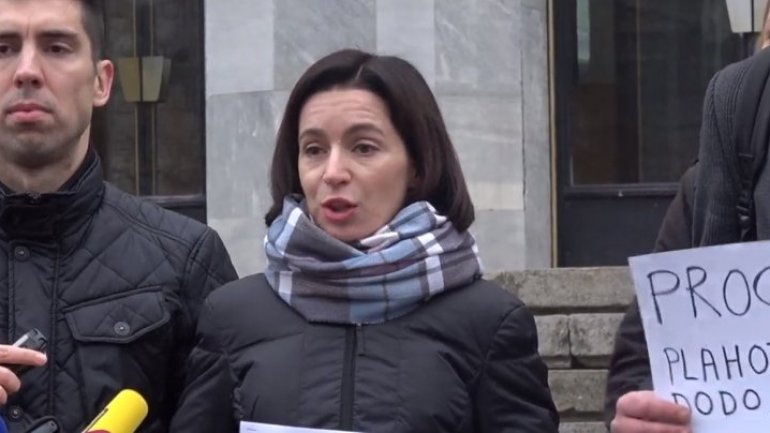 The Prosecutor's Office for Combating Organized Crime and Special Causes did not find any grounds for starting criminal prosecution against Vlad Plahotniuc.

Before, PAS leader, Maia Sandu demanded the politician to be prosecuted for usurpation of power in the state.

Prosecutors have heard several high-ranking officials, including the prime minister, the head of the Legislature, and several elected people who have vehemently condemned Maia Sandu's suspicions.

"I checked the information provided by the whistle-blower. We've heard more people, including high-ranking people, and we have not found any law violation. Respectively, the refusal to initiate criminal prosecution was ordered for lack of evidence, "said PCCOCS prosecutor Denis Rotaru.

The PAS leader has shown her dissatisfaction with this decision by a flashmob.

"We've come to present you the response of the General Prosecutor's Office, which says that man is clean as the tear, and we are examining the option to go further in court," said PAS leader Maia Sandu.

In press release, PDM reacted to accusations made by PAS representatives and described them as a desperate attempt to stop the rise of Democrats.

"What makes the PDM is to seek solutions together with the Government to stop the social disaster that Maia Sandu produced in the school system by closing down schools without a proper assessment, which led to a social catastrophe," the DPM .

Moreover, the Democrats have reminded Maia Sandu of her political past.

"We would like Maia Sandu to talk about usurpation when she was a PLDM representative, when Vama and Fiscor terrorized business and citizens, when teachers were forced to participate in her party's electoral events."

Over time, several interceptions appeared in the press, demonstrating the illegalities made by PLDM members. Mayor Sandu's head, Vlad Filat, and her colleagues from the party, set up fraudulent schemes to make their interests.

Moreover, while he was prime minister, Vlad Filat told FISC chief Nicolae Vicol to block the accounts of the company belonging to the son of president of the People's Assembly of Gagauzia, Dmitriy Constantinov.

After this scandal, in 2014, Maia Sandu joined the PLDM list.

"I am also going to become a member of the PLDM team to contribute to the forward movement of the country," said PAS leader Maia Sandu.