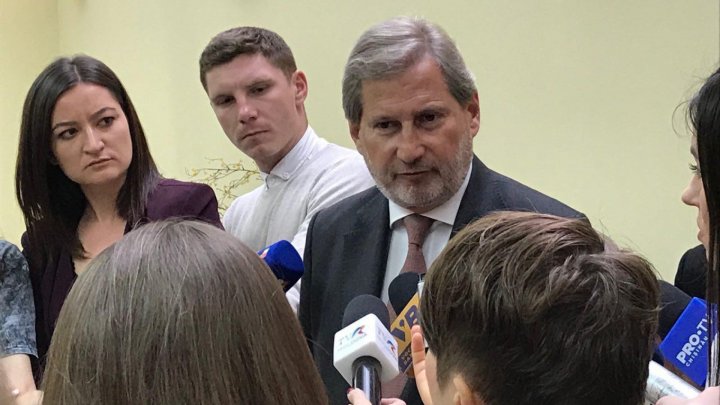 Johannes Hahn, the European Commissioner for European Neighbourhood Policy and Enlargement Negotiations, has paid visit to our country. The official met with representatives of PDM, PSRM and ACUM bloc as well as President Igor Dodon and PM Pavel Filip.

At the end of the visit, Johannes Hahn made a press declaration. He wished that our country would create a government soon and European Union supported every government who work for people's benefits.

"EU don't impose and promote anything. We hope there exists a stable government as soon as possible and politicians can work to improve the people's well-being", said the official.

"Every government should remain committed to democracy, human rights, pluralism of opinion, economic growth. It's important that the government program is not the paper but concrete steps to bring the state closer to democracy", said Johannes Hahn.

He also highlighted that three parties must sit at negotiation table and snap elections shouldn't be the country's solution.

"None of the parties should be excluded. We want to have a neighbor with peace which counts for us", Hahn insisted.

"Should the early elections take place, it's likely that International Monetary Fund will suspend the financial program for Republic of Moldova and this will lead to consequence over EU financial assistance program", added Hahn.

Bradley Freden, director of the US Department of State for European Affairs also paid visit to our country and met with our officials. At the meeting with PM Pavel Filip, he insisted that the US will continue to support the Republic of Moldova in implementing democratic reforms, capitalizing on the European path and strengthening institutional capacity.

During the talks, Pavel Filip appreciated the good cooperation between Moldova and the USA in the political, economic, democratic and anti-trafficking areas, noting that Moldova attaches great importance to bilateral relations with the United States of America.

At the same time, the officials noted the good results of the US businessmen mission held in Chisinau from April 10 to 12, emphasizing the interest for a more intense capitalization of the economic and investment potential.