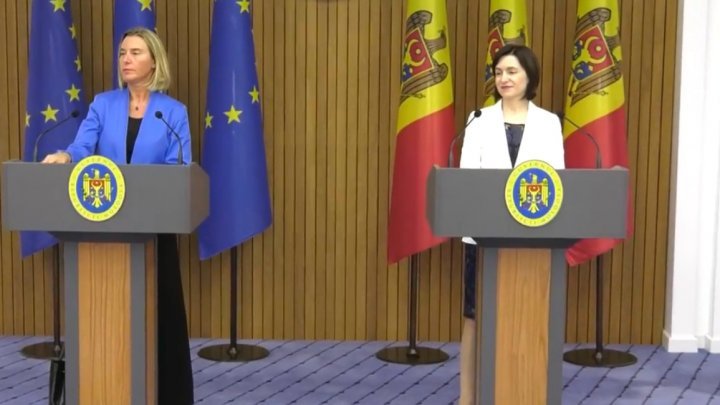 The collaboration between the European Union and the Republic of Moldova, the Transnistrian regulation and the reforms that will be implemented, were some of the topics discussed by Prime Minister Maia Sandu, who today had a meeting in Chisinau with Federica Mogherini, High Representative of the Union for Foreign Affairs and Security Policy.

"We hope to intensify our collaboration and understand that we must fulfill our commitments in order to gain EU support. We talked about the fight against corruption and justice reform. We discussed how complicated it is, and we have received assurances that EU will continue to be on our side, on the side of citizens. The Association Agreement with the EU is not only a collaboration agreement, but a document of internal policies, reforms for Moldova. We need the Association Agreement first and foremost, because it will bring about the improvement of living standards ", said Maia Sandu.

At her part, Federica Mogherini said that the EU will continue to support the Republic of Moldova, but it will be conditioned by the progress made in implementing the reforms. At the same time, Mogherini confirmed the EU's support for the integrity of Moldova.

"It is crucial to strengthen the independence of the institutions to rebuild public confidence. For us it is important to see the determination of the current government. Financial support will continue to be by the progress made in implementing the reforms. We have signed the agreement on financing for reforms to strengthen the power of law. At recent meetings we discussed the importance of resuming the judicial reform. It is important to encourage foreign investments to boost the Moldovan economy. This visit gave me the opportunity to confirm the support for the integrity of Moldova and special status for the Transnistrian region in Moldova ", the EU official concluded.

Meanwhile, Vice-President of the European Commission said that the local elections on October 20 will be an important test, and the EU will closely monitor the electoral process.

"This is the first electoral test of the current government. We will monitor the situation, the result and all the actions ".

The High Representative of the Union for Foreign Affairs and Security Policy, Federica Mogherini, pays an official visit to the Republic of Moldova today.