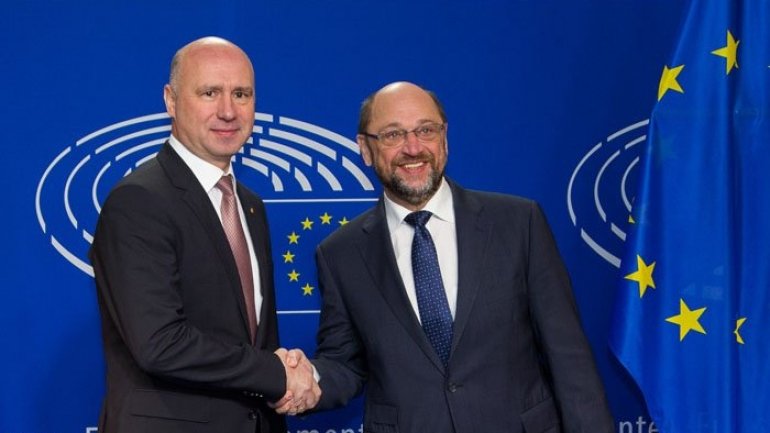 Prime Minister Pavel Filip has had today a meeting with European Parliament President Martin Schulz in Brussels. The officials discussed the progress made by Moldova in the process of implementation of reforms and EU – Moldova Association Agreement.

The prime minister expressed thanks to the European official for their constructive dialogue, pointing out that the encouragement and support of the European Parliament provided to Moldova's European course are very important for the authorities in Chisinau.

"We still believe into the European future of Moldova and we work every day to achieve that objective, while the European Parliament's reinforcement for the European perspectives of our country is an strengthening for their efforts," said Pavel Filip.

The head of the government reassured that both: Government and Parliament have a desire to realize all EU – Moldova Association Agreement commitments. The prime minister appreciated the fact that Moldova in 2016 still continues to be on the European Parliament program’s list of priorities. "The assistance on behalf of the European Parliament stimulates democratic sustentation and it allows us to improve the current formula of Government – Parliament collaboration and to streamline mechanisms for civil society involvement in the Association Agreement implementation," said Pavel Filip.

At his turn, the European official said that since March 2016 till present the Government has advanced in reforms, notably in justice and economic domains. The President of the European Parliament Martin Schulz reiterated Brussels' support for Moldova's European vector and assured full opening to encourage EU – Moldova partnership.
AFLĂ imediat Știrile Publika.MD. Intră pe Telegram