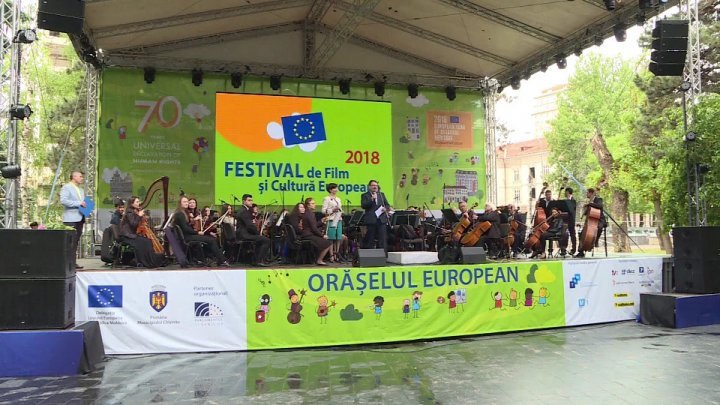 The European Film and Culture Festival 2018 kicked off today in Chisinau. The event was opened by the European Union delegation to Moldova.

People had the opportunity to watch a classical music show offered by the National Philharmonic Artists "Serghei Lunchevici", but also the film "Octav", which represented Romania at several film festivals in Europe.

EU Ambassador to Moldova Peter Michalko said that this kind of events are very important in order to establish closer ties with the European Union.

"Close to Europe, we are making every effort to bring European reality, European standards in the daily reality of the Republic of Moldova," said Peter Michalko, EU Ambassador to Moldova.

The State Secretary of the Ministry of Education, Culture and Research, Elena Belei, said that culture will always keep us united.

"From the cultural point of view, we are already part of the European Union, namely the culture through the various events. It unites what apparently seems to be divided," said Eelena Babelei, State Secretary of the Ministry of Culture.

If the big ones were interested in the prospects open to such events, the little ones enjoyed the show.

"The Film and Culture Festival is a way to show the whole world the culture of other peoples and to share the values of the European Union."

The evening will continue with a jazz recital of the band "FunCOOLio" in Lithuania and "Trigon" from us. Until June 3, the European Film and Culture Festival will reach several cities in the country.
AFLĂ imediat Știrile Publika.MD. Intră pe Telegram