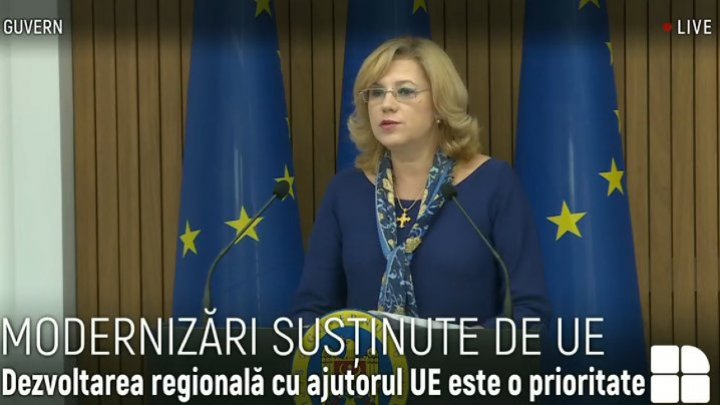 Brussels recognizes all steps that Moldova has made to reform and modernize the country. The EU will always be there to help robustly implement reforms in key sectors such as economic development, job creation, improving the business environment, energy, but also justice and the creation of law. The statements belong to the European Commissioner for Regional Policies, Corina Creţu, on the first official visit to Chisinau.

"I would like to say that the path to reforms and modernization of the Republic of Moldova, the steps you have made are recognized in Brussels. We are here to help and work together to focus on the robust implementation of reforms in key sectors such as economic development, job creation, improvement of the business environment, energy, justice and the creation of law. These things have already been mentioned in the conclusions of the most recent Association Council between the Republic of Moldova and the European Union. took place earlier this month in Brussels.

We, the EU, want to remain a strong partner for the development of the country, including in terms of regional development, the portfolio you spoke of and what under my direct responsibility, "said EU Commissioner Corina Cretu.

According to Corina Cretu, EU investment policy will contribute significantly to fighting poverty and reducing economic and social disparities in different regions of the Republic of Moldova.

"I deal with this investment policy that has real added value for all citizens in everyday life, contributing significantly to fighting poverty and reducing social and economic disparities in different regions.

We discussed this development gap between Chisinau and the other regions of the country. We know that half of Moldova's GDP, half of the country's active population is concentrated and comes from Chisinau. In our experience, an effective regional policy can help reduce these disparities and promote balanced development across the country.

Regional policy can help create the conditions and opportunities for jobs for all Moldovan citizens, no matter where they live, "Corina Cretu said.

The European Commissioner for Regional Policy praised our country for its active involvement in the EU Strategy for the Danube Region.

"I would like to congratulate the Republic of Moldova for being involved and actively participating as a legal partner alongside other 13 states within the framework of the EU Strategy for the Danube Region. This gives the Republic of Moldova the opportunity to cooperate with nine EU Member States (Romania, Bulgaria, the Czech Republic, Croatia, Germany as a federal state, Slovakia, Slovenia and Hungary) and four non-member states (Bosnia and Herzegovina, Montenegro, Serbia and Ukraine) on topics of common interest. would be the water sector and employment policy.

I am very pleased, especially because the Republic of Moldova is one of the coordinators of the priority axis of the Danube Strategy on Human Capital and Human Skills with Austria, given the importance of increasing employment, especially for regions. The principle of this strategy is that its actions can be funded by existing instruments such as cross-border programs. We support a transnational Danube program that includes the same countries and can co-finance projects in the area. I would like to congratulate the Republic of Moldova for its efforts to join this program. The results have not been long awaited, "said European Commissioner Corina Cretu.

"The Republic of Moldova also participates in an important cross-border program with Romania, with EU funding of over 80 million Euros and co-financed from the regional financing and the European Neighborhood Instrument. They are the Cahul and Ungheni regions which the EU accompanies local authorities to develop a long-term development strategy. Unfortunately, the Republic of Moldova is confronted with this brain drain and it is important for the youth to remain in the country and to have a good future in the Republic of Moldova.

We have several projects of common interest on both sides of the border such as education, research, cultural heritage, accessibility, and security of citizens, especially in the cybernetic field. The support that the EU intends to make available for the implementation of these pilot projects believes that it will make an important contribution to the implementation of the regional development policy in the Republic of Moldova.

I am glad that the Republic of Moldova has become the first Eastern Partnership country that is part of the EU Program for the Competitiveness of Small and Medium Enterprises. This is the COSME program. It is the first country associated with the 2020 Innovation Program. We estimate that these projects have created and will create over 20 thousand jobs in the Republic of Moldova ", said European Commissioner for Foreign Policy, Corina Creţu.