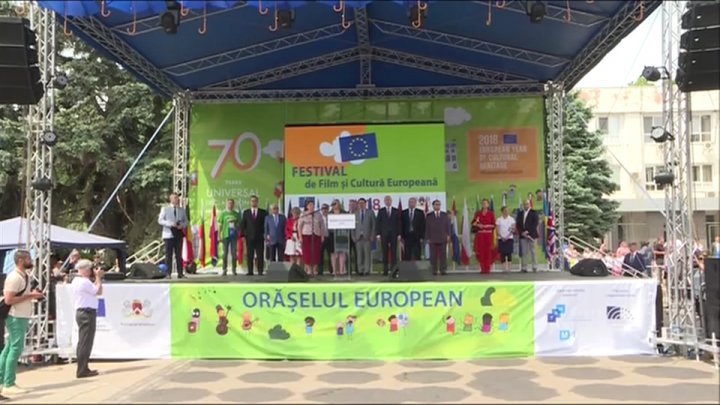 A European city has been set up in Ungheni. People enjoyed the culture, but also the dishes specific to several countries in the community bloc. Officials also attended the event: Commissioner for Regional Policies, Corina Cretu, Prime Minister Pavel Filip and European Union Ambassador Peter Michalko. They were served with goodies and were invited to drink raspberry brandy produced after a German recipe.

The visitors of the town also had the opportunity to taste the goodies of the local producers, who developed their business with European money. Prime Minister Pavel Filip tasted bread and strawberries.

"I was impressed how many projects are under way financed by the European Union in the Republic of Moldova," said Pavel Filip, the prime minister.

The European Commissioner said she would propose the creation of a joint working group for monitoring programs between the Republic of Moldova and the European Union. The projects, worth 81 million euros, will be implemented by 2020.

"I think it is important to have quality projects that will improve this connectivity between the European Union and the Republic of Moldova," said Corina Cretu, European Commissioner for Regional Policy.

"It is an honor for me to be here today with the European Commissioner for Regional Policy, whose visit and presence here is proof of decisive determination and decisive support from the EU for the Republic of Moldova," said Peter Michalko, Ambassador of the EU to Republic of Moldova.

In the district of Ungheni, with the support of Brussels, projects of about 10 million lei were implemented.

Ambassador of Poland to Chisinau believes that the authorities use European money efficiently.

The European city was organized for the first time in Ungheni. Such events will soon take place in Soroca, Balti and Hincesti.
AFLĂ imediat Știrile Publika.MD. Intră pe Telegram