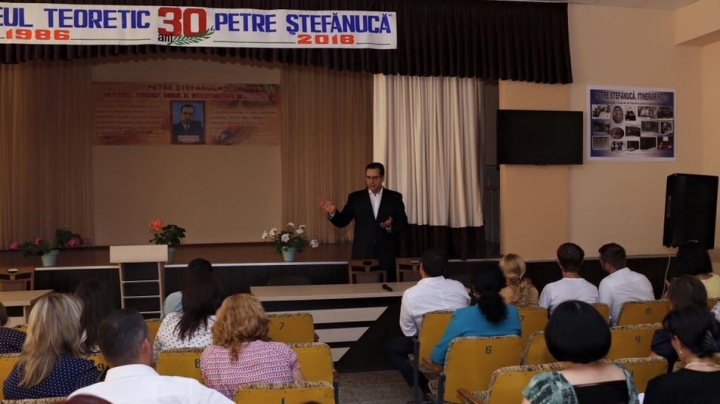 The European Caravan keeps wandering about Moldova. The campaign "Together we are stronger," launched by the Democratic Party (PDM,) reached Ialoveni district. The team headed by PDM leader Marian Lupu met the locals and visited several entities enjoying financial support on behalf of the European Union.

The people are fully conscientious of the benefits implied by the EU programs. An example is setting up the Inclusive Education Unit at Petre Ştefănucă high school from Ialoveni. The program is a premiere for the Moldovan education system, as the disabled students are going to gradually integrate into the general education process. The project has been funded by a British NGO and the Ialoveni District Council.

"The foreign languages are highly important and I am grateful to you all for teaching the children English and French," Marian Lupu said.

"It’s been a productive meeting, because we have talked about the European integration and about the projects we have and will have with the Europeans,” headmaster of the school Vera Balan said.

„We have a single natural gas provider and it’s a dangerous thing for Moldova. A country should have at least two, better three, alternative sources supplying this strategically paramount fuel,” Marian Lupu specified.

„We are already ready to go towards the EU, since Moldova Gaz has implemented all the standards,” said Victor Gonţa, the manager of Ialoveni-Gaz.

Then the PDM team visited Mileştii Mici winery. Although it is in the Guinness Book for the biggest collection of wines, the company needs investments to raise its standards.

„Everything related to equipment, exports, expanding markets depends on the EU,” said the manager of the winery, Viorel Bezede.

The European caravan is going to reach all the districts in the country in the coming three weeks.