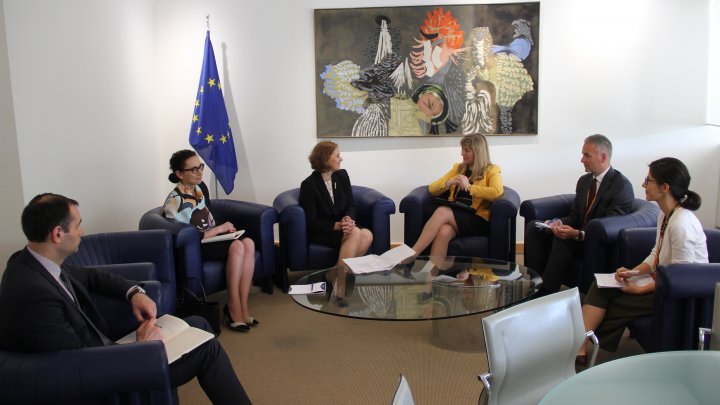 During a visit to Strasbourg, Justice Minister Victoria Iftodi had a meeting with Director-General of the Directorate for Democracy, Snezana Samardzic-Markovic. The two officials discussed the current situation in the Republic of Moldova, the reforms implemented in justice and the measures taken by our country in the field of respect for human dignity and anti-discrimination.

Minister of Justice informed the European official about the current situation in Moldova progress in reforming the judiciary, fight against corruption and efforts of our state in honoring commitments made when joining the Council of Europe, a particular focus on developments in the protection human rights and the consolidation of democratic institutions.

Director General of Democracy announced that closely follows developments in our country, and encourages actions in respect for human dignity, improve the functioning of democratic institutions and the promotion of diversity in society, solidarity and tolerance.

Justice Minister appreciated the support provided by the Council of Europe for expertise on the National Action Plan on Human Rights for the period 2018-2022, to be adopted as soon as possible in Parliament and rise to the highest European standards in areas such would be equality, tolerance and non-discrimination.

Minister Iftodi also thanked the Director General of the Council of Europe for the valuable assistance provided, in particular through the cooperation program on preventing and combating discrimination.

In turn, the Director-General said the Minister's presence in Strasbourg confirmed the commitment and the interest of the Republic of Moldova in intensifying the democratic processes in the country.
AFLĂ imediat Știrile Publika.MD. Intră pe Telegram