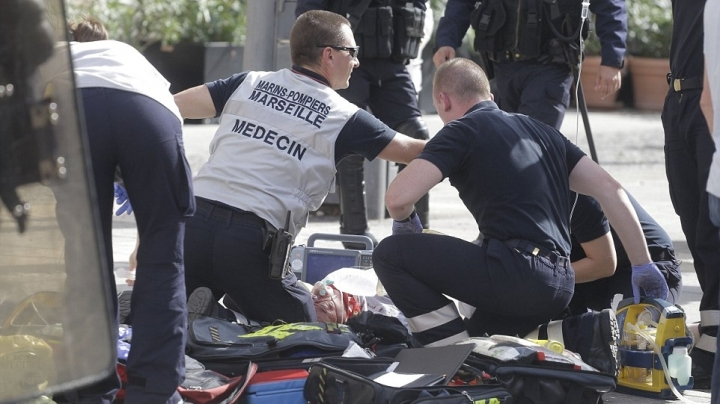 According to Daily Mail, Russian football hooligans fired a flare gun into the England fans - in what appears to be a major security breach at the European Championships.

The organisers of the tournament had promised 'unprecedented' levels of security to protect fans in France, with 90,000 soldiers and police officers guarding stadiums and fan zones.

But the beginning of the event has already been marred by violence and question marks over the heavy-handed tactics deployed by French police.

Last night several hundred English and Russian fans squared off in Marseille, hurling beer bottles and chairs and drawing volleys of tear gas from riot police who struggled to contain the rioting in the narrow streets of the Old Port district.

Inside Marseille's Stade Vélodrome the Balaclava-clad Russian thugs - wearing gum shields - then charged at their English counterparts at the final whistle - as well as firing a flare gun into the England fans.

A green rocket was also set off, which went over England goalkeeper Joe Hart's goal. This was followed by a bang and then a red firework.

England fans hurled themselves over railings and concerned parents were seen carrying their children away from the fighting, with stewards - rather than police - left to intervene between scuffles.

UEFA has announced that it will launch an investigation into the crowd trouble, with 2018 World Cup hosts Russia [and not England] to face action for their role in the violence.

Four years ago Russia was sanctioned and handed a suspended six-point deduction following crowd trouble in Poland at Euro 2012.

European soccer's governing body, UEFA, condemned the day's events. In a statement it said: 'People engaging in such violent acts have no place in football'.

The FA have condemned the brawling in Marseille with spokesman Mark Whittle saying 'the FA is very disappointed by the terrible scenes that we saw there and of course condemns such behaviour.'

Marseille's emergency services said 35 people were injured in Saturday's disorder, including one middle-aged man who was knocked unconscious, and one England supporter who suffered a heart attack when he was beaten senseless.

French police had used a water cannon to blast jets into the crowd in an effort to quell violence between warring fans in the Old Port, who continued to battle each other, local gangs and riot police.

It marked the worst day of brutality in the Old Port since violence exploded onto the streets on Thursday and Friday. Riot police originally relied on tear gas and batons to disperse the crowd but then ramped up their force to take control of the rioting.

The streets were carpeted with glass and chairs were seen smeared with blood as the police struggled to contain the violence.

The Russian hooligans, who were reportedly armed with knives, charged at England supporters yesterday afternoon around 3pm.