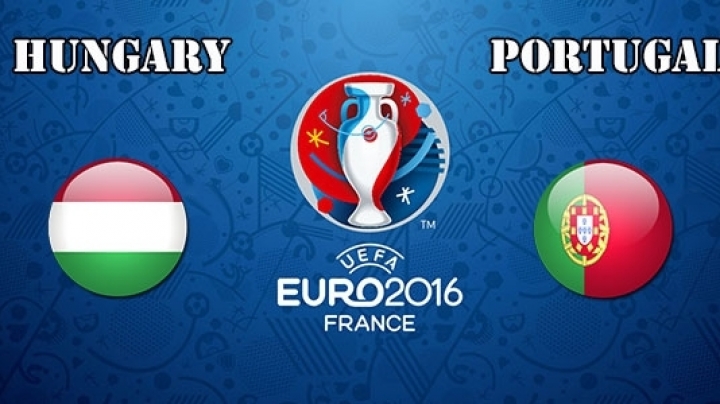 After a morning in which he threw a reporter's microphone into a lake, Cristiano Ronaldo made another big splash at Euro 2016 by firing Portugal into the European Championship's knockout stages, reports CNN.

Having previously failed to score in the tournament, Ronaldo netted twice as Portugal came from behind three times in the 3-3 draw with Hungary in Lyon.

The result was enough to secure third place in Group E for Portugal - despite Fernando Santos' team drawing all of its three games. It means Portugal will now face Croatia in the next round in Lens on Saturday.

Hungary hadn't been tipped to make it through to the last 16, but took five points from its three matches to top the group and edge Iceland into second.

With both teams abandoning any notion of defense, Portugal and Hungary went head-to-head for 90 minutes in a thrilling contest.

Much maligned after his missed penalty cost Portugal victory against Austria at the weekend, Ronaldo was frequently at the heart of the action.

The scorer of 364 goals in 348 games for Real Madrid, the Portugal captain had looked a shadow of himself prior to Wednesday and earlier in the day had clashed with a television reporter while out walking with his teammates - an incident which led to him throwing a microphone into a nearby lake. If that was supposed to distract him, it appeared to have worked - in the first half at least - as Portugal and Ronaldo struggled badly.

Trailing to Zoltan Gera's tremendous strike - a wonderful half-volley - Portugal's participation in the tournament appeared endangered. But with three minutes of the first half remaining, Ronaldo unlocked the Hungary defense with an exquisite through ball, allowing Nani to fire home an equalizer.

That goal was supposed to settle Portugal down but if anything it only served to rouse Hungary once again.

Balazs Dzsudzsak's deflected free kick gave Hungary a 2-1 advantage before Ronaldo hit back with a sublime finish using his heel to become the first player to score at four consecutive European Championship finals.

It was a wonderful moment of individual brilliance and understandably Ronaldo celebrated with his trademark exuberance.
AFLĂ imediat Știrile Publika.MD. Intră pe Telegram