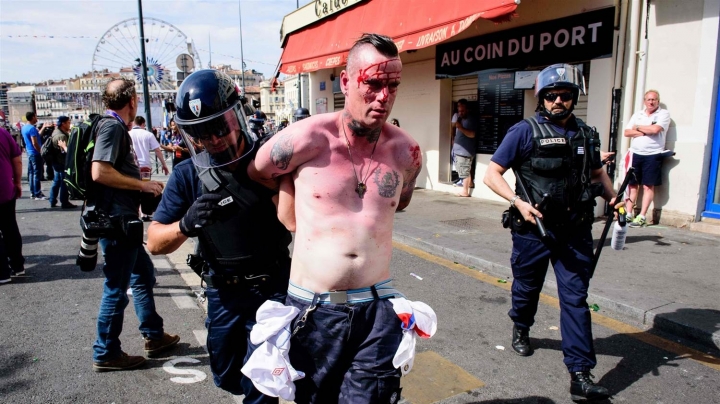 Packs of Russian and English football fans clashed in the French city of Marseille in a third straight day of battles at the Euro 2016 championship, says CNN.

Fans brawled before and after the game Saturday, forcing police in riot gear to fire tear gas to disperse crowds. Throngs lunged at one another, and hurled bottles and other objects at officers.

After the game, Russian fans charged at the section where their British counterparts sat as chaos ensued. Smoke filled the streets as panicked fans fled.

At least 31 people were injured in the clashes, four of them critically, said a spokesman for Marseille police. The number included three officers who suffered slight injuries.

On the field, the Russians and English tied 1-1, but French authorities were determined that fighting fans on the street would both lose.

At least 17 people were arrested over two days, police said Saturday. The French Interior Ministry classified the England vs. Russia match "at risk" and police sent in reinforcements.

The Union of European Football Associations said they will make an announcement Sunday regarding disciplinary proceedings. This could mean sanctions for Russia or England or both.

The French Interior Ministry announced international moves to keep hooligans out of the country during the European Championship. At the request of French authorities, Britain retained the passports of thousands of people considered hooligans, stopping them from coming to France during the competition.

Other steps included bars closing early in the Vieux-Port area in Marseille - the same area violence broke out Thursday and Friday nights among football fans.