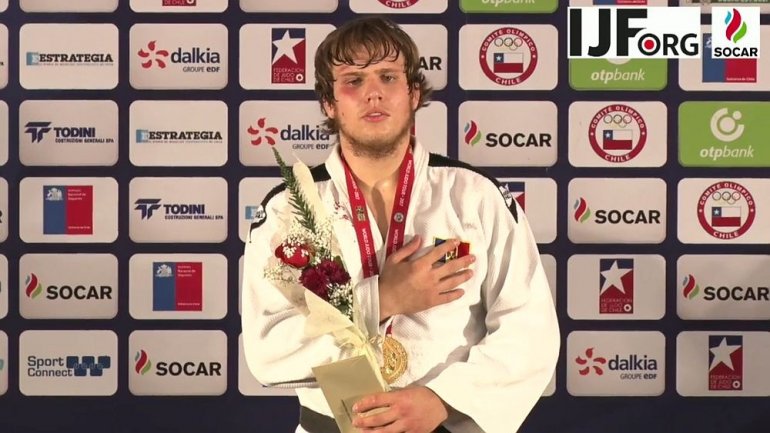 Being World Judo champion among cadets in Santiago of Chile, Moldovan athlete Eugen Matveiciuc was not considered a talented sportsman at the beginning of his career.

He was only 6 years old when entering the training room, however, he did not even possess a sports figure.

Eugen was overweight and the target that his training colleagues poked fun at. At that time, he joined the team coached by Mihai Ciudin at the Republican Intern High School with a Sports Profile from Chisinau.

"The boys made fun at me due to my weight, I was really upset. It was hard for me firstly, but I got along quite well later" Judoka Eugen Matveiciuc said.

Step by step, Eugen lost weight and progressed obviously. He followed his father's footsteps, Catalin, who was also judoka.

"He has been an example and my idol. He teaches me lots of precious lessons. Persistent work will pay us reward. "

The first major success came in 2015, when Eugen won the bronze medal at the Budapest Cup international tournament.

Over two years, the young judokan performed such great surprise in Chile world tournament where he won the gold medal though he was not among the favorites. The 16-year-old athlete defeated opponents from Brazil, Armenia, Canada, Tajikistan and Argentina.

"I was fighting with enthusiasm as I did in the first one. I faced the final and became a champion. Honestly, that was my goal and I was so proud of touching that medal, "said Judge Eugen Matveiciuc.

The key to Eugen Matveiciuc's success is daily hard works of training.

"He is not very talented, he is very hardworking, ambitious, self-confident and determined in everything he does," said the coach of the judo national team, Veaceslav Bacal.

Eugen Matveiciuc's spectacular performance was not overlooked by state officials.

Judokan met with Moldovan Democratic Party Chairman Vlad Plahotniuc, who promised to boost his career. He was also rewarded a diploma by the Japanese Ambassador to Chisinau, Masanobu Yoshi.