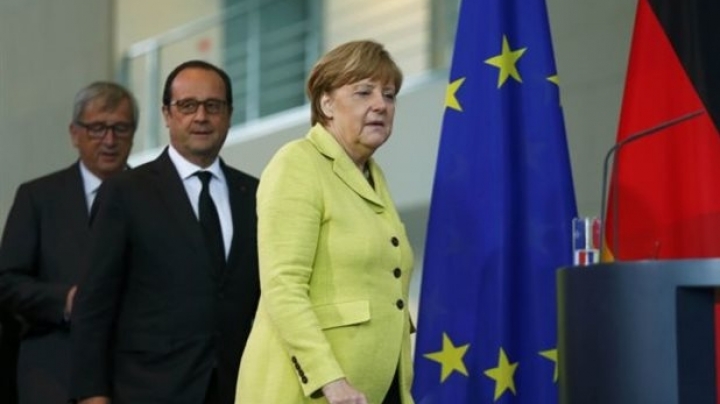 Britain and the EU appear more bitterly divided over Brexit than at any time since the referendum, with European leaders ramping up their rhetoric after Theresa May signalled she would seek a clean break with the bloc.

The prime minister’s Conservative conference speech, in which she indicated Britain would prioritise immigration control and restore the primacy of UK law to become an “independent, sovereign nation” without full access to the single market, drew a sharp response from continental capitals.

In Paris, François Hollande said Britain must suffer the consequences of its decision. “The UK has decided to do a Brexit. I believe even a hard Brexit,” he said. “Well, then we must go all the way through the UK’s willingness to leave the EU. We have to have this firmness.”

If not, “we would jeopardise the fundamental principles of the EU”, the French president said on Thursday night. “Other countries would want to leave the EU to get the supposed advantages without the obligations … There must be a threat, there must be a risk, there must be a price.”

Hollande’s message was underlined on Friday by the president of the European commission, Jean-Claude Juncker, who said the 27 remaining member states must not give an inch in exit negotiations. “You can’t have one foot in and one foot out,” he said. “We must be unyielding on this point.”

Britain risked “trampling everything that has been built” over six decades of European integration, he said.

In Berlin, Angela Merkel rammed home the same point. “If we don’t insist that full access to the single market is tied to complete acceptance of the four basic freedoms, then a process will spread across Europe whereby everyone does and is allowed what they want.”

Merkel called on German industry leaders to back the government’s line in Brexit talks, even if it hit their profits. “We have to make sure our interests are coherent here so that we won’t be put under pressure constantly via European industry associations to eventually allow full access to the internal market even if all freedoms aren’t respected,” she said.

The British government has yet to confirm what kind of future relationship it will seek with the EU, but the conditions set down in May’s speech – in particular migration controls on EU citizens and the insistence that Britain will no longer be under the jurisdiction of the European court of justice – effectively rule out membership of the single market.