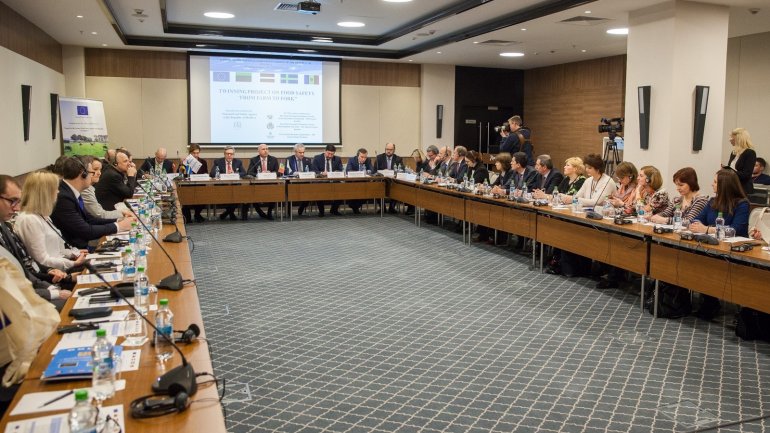 The Prime Minister Pavel Filip has attended the launch of the project "Support to the National Agency for Food Safety Moldova", supported by the European Union. The project aims at building a uniform system of food safety control in Moldova and adjust the work of operators in the food industry to European standards.
"The project launched today will ensure Moldova's alignment to the requirements of the acquis communautaire in the field of food safety" , said Pavel Filip.

The Executive head of ANSA has urged responsibility in this project, taking into account, firstly, the benefit of Moldovan citizens.

The Prime Minister has said that the last year the wine exports to the European Union have increased by 20 percent compared to 2015, along with the exports of grain and grape. But to expand the range of food products exported to EU markets is necessary to strengthen food safety control system.

In this sense, "The government will be guided by the provisions contained in the" food safety" of the Association Agreement of Moldova-European Union. A priority is the reconstruction and the international accreditation of the national network of laboratories, a process to be completed by the end year" , said Pavel Filip.

Attending the event, Head of EU Delegation in Moldova, Pirkka Tapiola said that ANSA represents the visit card of domestic producers and reform implementation organization will bring added value to the economy and will help to promote local products on the international market.

"Statistics export of local products on the EU market shows an impressive, but above statistics is their quality. The implementation of food safety management control directly ensures public safety" , added the head of the EU delegation in Chisinau.

The project "Support to the National Agency for Food Safety" has a total budget of € 2 million and will be implemented over two years.
AFLĂ imediat Știrile Publika.MD. Intră pe Telegram