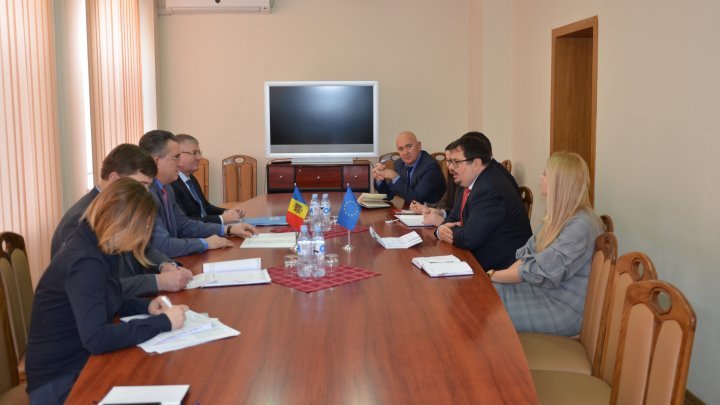 The EU and Moldovan Customs Service organized round of discussions on projects to modernize custom station infrastructure.

The talk focusing on Palanca border crossing point which is due to be commissioned this year was held by Customs Director General Vitalie Vrabie and the EU Ambassador to Moldova, E.S. Peter Michalko.

Particularly, the dialogue concerned the rehabilitation of access routes and the organization of construction works, so as to exclude possible traffic restrictions.

On this subject, Customs Director General Vitalie Vrabie told that rehabilitation project is set as priority of the institution.

"Palanca Customs Station repair is a strategic project which benefits primarily citizens. Moreover, the reconstruction won't affect the station functionality which will allows the movement of more categories of transport", explained Vitalie Vrabie.

In this context, we would like to mention the modernization of the infrastructure of the Giurgiulesti-Reni and Cuciurgan-Pervomaisk crossing points, started in this month, for which 4.7 million euro was allocated.

The second project, with a total budget of EUR 10 million, concerns the rehabilitation of the Leuşeni-Albiţa, Sculeni-Sculeni and Giurgiulesti-Galati crossing points.

It is to be implemented under the Romania-Moldova Operational Program 2014-2020, financed by the European Union and co-financed by the Governments of the two beneficiary states.