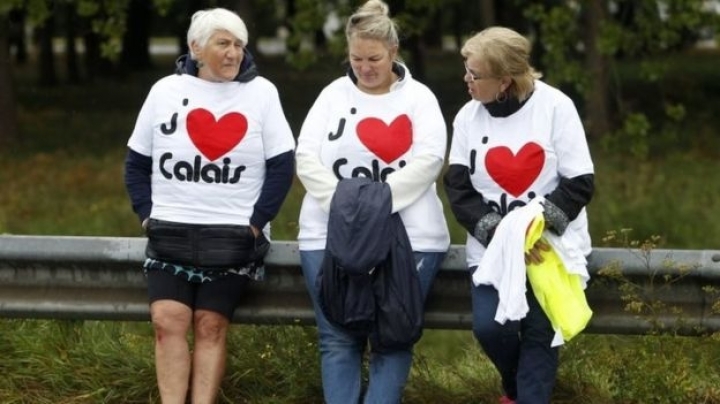 A blockade of lorries in conjunction with a human chain on the roads around the French port of Calais is causing severe disruption on the roads. The protesters are demanding the closure of the "Jungle" migrant camp, BBC reports.

Calais Mayor Natacha Bouchart has joined demonstrators who argue the camp undermines the town and causes disruption at the port.

More than 7,000 people now live there, in squalid conditions. Many of them try to jump on lorries to reach Britain.
Monday's protest is likely to be the largest local people have held against the Jungle.

Those living in the camp, who are mainly from the Middle East, Afghanistan and Africa, hope to cross the Channel, often using people traffickers to try to enter illegally.

French shopkeepers, police, unionists and farmers joined hauliers in staging the blockade on the motorway near the port.
Trucks and tractors from Dunkirk and from Boulogne began the protest early on Monday morning on the A16, which runs along the edge of Calais.

They are converging near the entrance to the Channel Tunnel and ferry terminals.

A human chain has also been formed across the road leading to the ferry port, near the Stade de l'Epopee football stadium.

Protesters are walking along the motorway holding banners and placards.