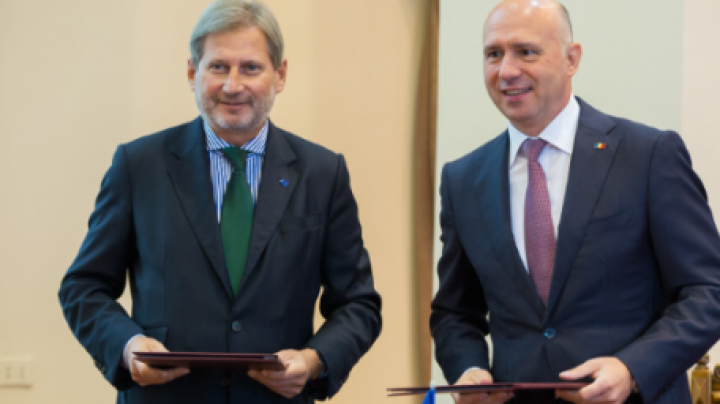 The discussions were focused on reforms promoted by the Moldovan authorities and the country’s European integration. PM Pavel Filip said that, due to the efforts deployed in the last months, Moldova had returned on the way of stability, the reforms had been sped up, more achievements were recorded, but there are still key things to be done.

In this context, the prime minister described the visit to Moldova by EU Commissioner Johannes Hahn as an important moment in the Moldova-European Union relation. “For us, the government members, the visit represents a recognition of the efforts to re-bring on the right path the process of reforms provided for in our European agenda, and not only. For the citizens and the foreign partners, it is meant to signal the EU’s continuous commitment for cooperation with Moldova and, respectively, recognizing the positive results achieved,” Pavel Filip said.

The two officials agreed that next stage in the authorities’ work would be the implementation of the important packages of laws approved in the first half of this year and achieving visible results. Also, the sides discussed priorities set by the government for the next period, which regards including: fight against corruption, continuing investigating the bank fraud, adopting a new audiovisual code, financial and banking sector.

During discussions on the dynamic of turning to account opportunities of the Deep and Comprehensive Free Trade Area with EU, Prime Minister Pavel Filip welcomed EU’s recent initiative on the European External Investment Plan, which will regard EU’s neighbourhood, aiming at encouraging investments. The PM also expressed Moldova’s interest in getting involved, as soon as possible, in activities EU will envisage to turn to account this initiative.

For his part, Commissioner Hahn appreciated the results achieved in implementing the Roadmap and encouraged the pressing ahead, in the same sustained pace, with the reforms meant to bring qualitative transformations for Moldova’s citizens and to contribute to achieving the goal of the country’s political association and economic integration into EU, provided for in the Association Agreement. “The adoption of all measures agreed upon in the Roadmap was a major achievement, and their implementation is probably the biggest challenge for the authorities now. The European Union expects Moldova to yield concrete results now, so that the citizens may see the value added of these efforts,” the European official said.

Touching upon the political situation in Moldova, Johannes Hahn stressed the importance to ensure stability. “I paid my first visit to Chisinau when I was appointed to this office in November 2014. It took some time; yet, I can say that this was not my fault, this was because of the political situation in Moldova in the last year and we are happy that presently we have a stable political situation in the country. I think that it is important and relevant to give an impetus to the country’s development and certainly, in several years, when time comes, general elections will take place and the citizens will be invited to make the choice,” the European commissioner for Neighbourhood Policy and enlargement negotiations added.