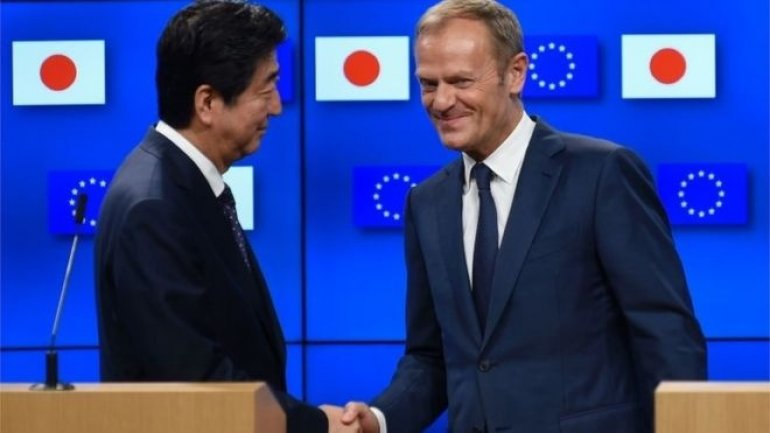 The European Union and Japan have formally agreed an outline free-trade deal.
The agreement paves the way for trading in goods without tariff barriers between two of the world's biggest economic areas.
Two of the most important sectors are Japanese cars and, for Europe, EU farming goods into Japan.
The outline plan was signed in Brussels after a meeting between the Japanese Prime Minister, Shinzo Abe, and the European Commission president, Jean-Claude Juncker, on the eve of a meeting of the G20 group of leading economies in Hamburg.
The president of the European Council, Donald Tusk, said the deal countered the argument put forward by some of those in favour of Brexit that the EU was unable to promote free trade: "Although some are saying that the time of isolationism and disintegration is coming again, we are demonstrating that this is not the case."
Japan is the world's third-largest economy, with a population of about 127 million.
Even once the agreement is fully signed, the deal is likely to have in place long transition clauses of up to 15 years to allow sectors in both countries time to adjust to the new outside competition.