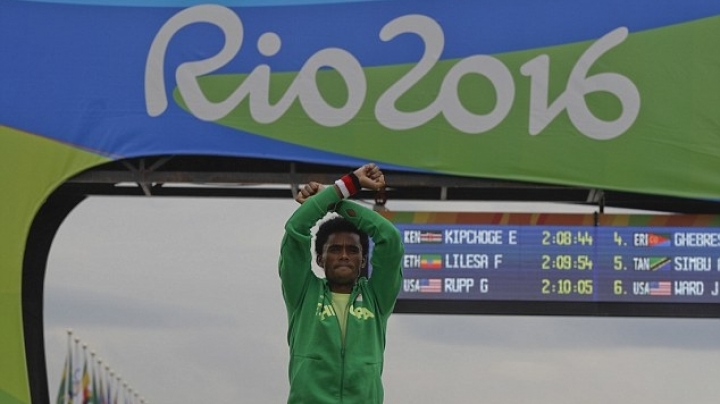 Lilesa crossed his arms above his head as he finished the gruelling event - as a sign of solidarity with the Oromo people, who are protesting against the Ethiopian government reallocating them from their farmland.

The marathon runner, who was second to Kenyan favourite Eliud Kipchoge, claimed his life could be in peril after making the sign.

The signal was in gesture of support for members of his Oromo tribe who have been protesting at government plans to reallocate farmland.

Plans to allocate land surrounding the capital for development prompted fierce demonstrations in November and spread for months, in the country's worst unrest in more than a decade.

Ethiopia has long been one of the world's poorest nations but has industrialised rapidly in the past decade.

However, reallocating land is a thorny issue for Ethiopians, many of whom are subsistence farmers.

Authorities scrapped the scheme in January, but protests flared again this month over the continued detention of opposition demonstrators.

In early August, protesters chanted slogans during a demonstration over what they say is unfair distribution of wealth in the country at Meskel Square in Ethiopia's capital Addis Ababa.

Human rights groups say that Ethiopian security forces have killed scores of people in recent weeks as authorities crack down on a wave of anti-government unrest in two key regions, central-western Oromia and Amhara in the north.

The government disputes the figures and says illegal protests by 'anti-peace forces' have been brought under control.

Any sign of unrest is closely watched in Ethiopia, a Western ally against Islamist militants in neighbouring Somalia and an economic power seen as a centre of relative stability in a fragile region.