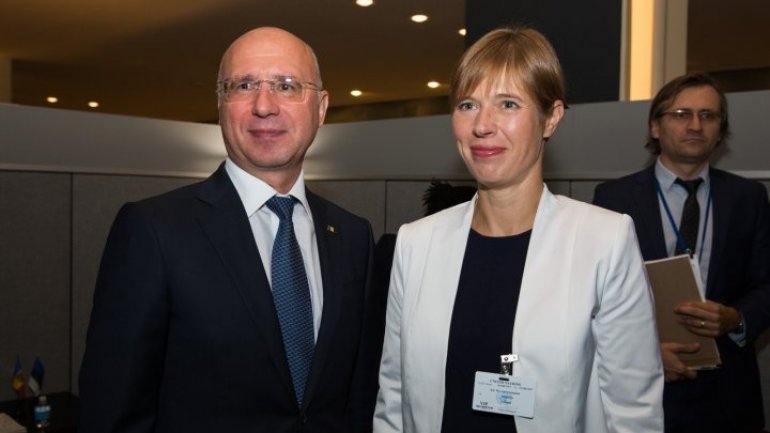 Prime Minister Pavel Filip met today in New York with the President of Estonia, Kersti Kaljulaid. The discussions of officials focused on the prospects for developing political dialogue between states, emphasizing the importance of maintaining an effective exchange of views on the current issues on the agenda of bilateral relations.

The prime minister thanked the Estonian side for the constant support of the European path of our country, stressing that the Chisinau authorities continue to rely on the achievement of its objectives, including in the context of Estonia taking over the presidency of the EU Council.

The prime minister stressed on the importance of exchanging experience on areas of common interest, aimed at achieving concrete results for the benefit of citizens.

At the same time, the officials discussed the latest developments in the settlement of the Transnistrian conflict.

Prime Minister Filip asked Estonian support to include on the agenda of the UN session the issue of the withdrawal of foreign armed troops from the territory of the Republic of Moldova.

In this context, Pavel Filip mentioned the artificial character of this conflict, which is not based on ethnic, religious or other differences, specifying that it is currently being discussed to solve the economic problems of the citizens of the region, including: international traffic, apostille of diplomas and other important issues.

In turn, Estonian President Kersti Kaljulaid has confirmed her tendency to support our country with regard to the withdrawal of foreign troops from the territory of the Republic of Moldova. Likewise, the Estonian official reiterated the full support for the European path of our country, noting that Moldova continues to be among the priority beneficiary countries of the Estonian Government cooperation development program.

The officials also mentioned the importance of implementing the energy interconnection projects of the Republic of Moldova to the European system, which are extremely important for ensuring the energy security of our country.