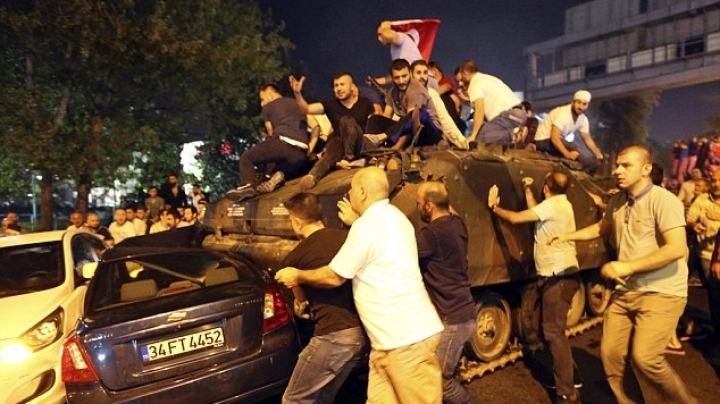 Turkish president Tayyip Erdogan evaded death by just minutes as rebel F-16 fighter jets locked him in their sights but didn't open fire tried to kill him as he fled the coastal resort of Marmaris during the military coup, the government has claimed, reports Daily Mail.

The Turkish leader was returning to Istanbul from a holiday after a faction in the military launched the coup attempt, sealing off a bridge across the Bosphorus, trying to capture Istanbul's main airport and sending tanks to parliament in Ankara.

Now two government officials have revealed that Erdogan's presidential jet was harassed in the air by the fighter jets and escaped death by just minutes as he fled Mamaris.

A former military officer with knowledge of the events claimed: 'At least two F-16s harassed Erdogan's plane while it was in the air and en route to Istanbul.

'They locked their radars on his plane and on two other F-16s protecting him.

'Why they didn't fire is a mystery.'

Meanwhile another Turkish official confirmed that Erdogan's business jet had been harassed while flying from the airport that serves Marmaris by two F-16s commandeered by the coup plotters but that he had managed to reach Istanbul safely.

A second senior official also said the presidential jet had been 'in trouble in the air' but gave no details.

Erdogan said as the coup unfolded that the plotters had tried to attack him in the resort town of Marmaris and had bombed places he had been at shortly after he left. He 'evaded death by minutes', the second official said.

Around 25 soldiers in helicopters descended on a hotel in Marmaris on ropes, shooting, just after Erdogan had left in an apparent attempt to seize him, broadcaster CNN Turk said.