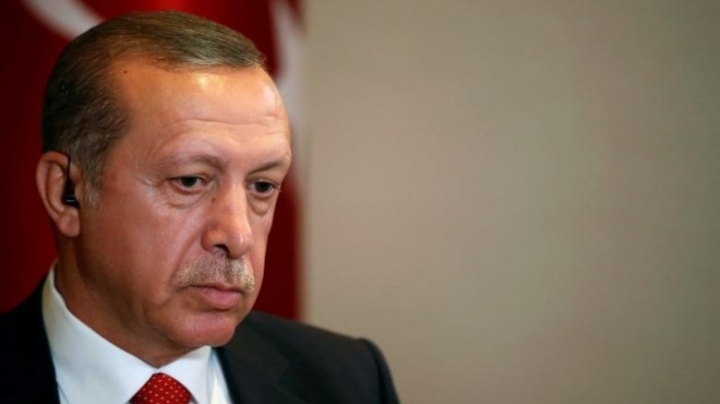 Turkish President Tayyip Erdogan said U.S. federal attorneys took aim at him in their prosecution of a Turkish gold trader accused of helping to violate sanctions against Iran, reports Reuters.

U.S. authorities arrested Reza Zarrab, a dual Turkish-Iranian national who has ties with high-ranking Turkish officials, in Miami in March on charges he helped Iran process millions of dollars of transactions when it faced U.S. sanctions for its nuclear program.

The 33-year-old businessman, who lived in Turkey, remains in custody in New York. He has pleaded not guilty.

U.S. Attorney for Manhattan Preet Bharara's office included in its indictment a corruption investigation in Turkey that targeted Zarrab, cabinet ministers and members of Erdogan's family in late 2013. That probe had subsequently been dropped and prosecutors and investigators in the case re-assigned or sacked.

Private broadcaster NTV quoted Erdogan as telling a group of reporters he had raised Zarrab's detention in talks with U.S. Vice President Joe Biden, whom he met in New York last week after speaking at the United Nations general assembly.

Erdogan said U.S. prosecutors were trying to implicate him by including in the indictment Zarrab's donations to an educational charity called Togem that is linked to the president's family.

Erdogan also accused U.S. officials involved in the case of traveling to Turkey as guests of a religious movement led by Muslim cleric Fethullah Gulen. Turkey now classifies the movement, dubbed FETO, as a terrorist organization that it blames for a failed military coup in July that killed hundreds.

Zarrab's lawyers last month filed a motion asking the federal judge, Richard Berman, to recuse himself due to comments he made about Zarrab's prosecution in Turkey at a 2014 conference they said was sponsored by lawyers charged in connection with the coup attempt. Berman's chambers and a spokesmen for Bharara did not comment.

Turkey wants the United States to arrest and return Gulen, who resides in Pennsylvania, to Turkey. Gulen, once a close ally of Erdogan, denies involvement in the coup attempt.

Erdogan, whom U.S. prosecutors have said has "close ties" to Zarrab, has also cast the 2013 graft probe that included Zarrab as a coup attempt organized by the Gulen movement.

Turkey's justice and economy ministries had already investigated Zarrab and determined he was innocent, as had Iranian authorities, Erdogan said he told Biden, adding he would not remain "indifferent" to the detention of a Turkish national in the United States.

The arrest of Zarrab, a frequently photographed figure among Turkey's jetset, sent shockwaves through Turkey and cheered Erdogan's opponents who viewed the U.S. case as a blow to the Turkish leader, in power since 2003 as prime minister and, since 2014, as president.