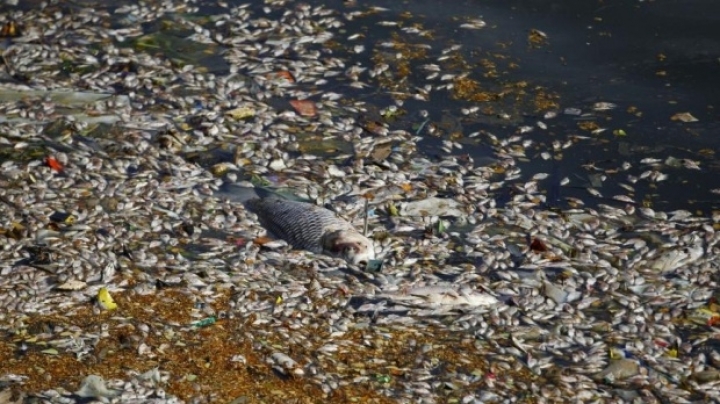 Environmental disaster in Dereneu village, Călăraşi district. Hundreds of dead fish filled a pond, and the pungent smell is felt from far away.

The situation alarms the villagers, who are scared at the emergence of an infection.

The population of Dereneu is surrounded by bitter smell because of dead fish.

“They need to eliminate this because it’s dreadful. Will take some kind of a disease, that will not get rid of for years,” said a man.

“The smell is bad. I’ve seen that, but it wasn’t that bad," a village resident says.

As the villagers get cold feet, the fish remains on the border of the pond.

The mayor office refused to undertake any actions, saying that the lake is leased and they are not obliged to clean the territory. They believe that the heat is the cause of the disaster.

“The pond is leased. We contacted the owner, but couldn’t reach him. They say that he is abroad. Because of the heat, the fish couldn’t breath and suffocated,” said engineer Vitalie Fussa.

The environmental controlor said that recently they had visited the pond, but didn’t notice any irregularities.

"The Food Safety Service has been contacted. They will come and collect evidence for the water analysis, to identify the cause of the death," said the chief of the Environmental Inspectorate in Călăraşi, Veniamin Ghilan.

The owner of the pond was not found to clarify things.