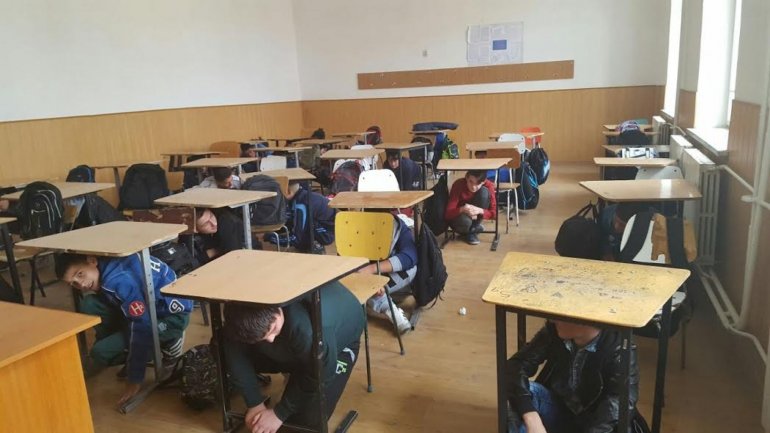 Pupils from the Academic High School "Gheorghe Asachi" have performed today an emergency situation training. Minors and Teacher had to perform safety strategies, as well as evacuate the building. Turned out that the evacuation time was longer than it could have been, due to blockage of some emergency exits.

Unlike last year, when an employee sprained his leg, this time everything went smoothly.

"In case of an earthquake we have to either evacuate the building, or hide under the table."

"First of all we must evacuate the building, but when it is not possible, we should keep away from elevators and hire beneath thick walls."

Pupils were also taught emergency numbers that should be called when something happens.

"We must call the firefighters, as they can help us."

However some difficulties were encountered, two door could not be opened.

"The school has 6 emergency exits, 2 of which are blocked by economic agents we are suing for seven years already" headmaster of Academic High School "Gheorghe Asachi", Boris Volosatîi declared.

According to the court's and City Hall's decision, the two building are allowed to continue activating, due to the presence of other emergency doors in the school.

"We have called the firefighter for this reason. They came and inspected the situation, declared that there are other emergency exists and advised to build another one. The last trial in court took palce on 11th this month" chairman of the Art Gallery from Chisinau, Pavel Bulici stated.

At the order of the Ministry of Education, emergency situation training were performed in all schools from Chisinau.