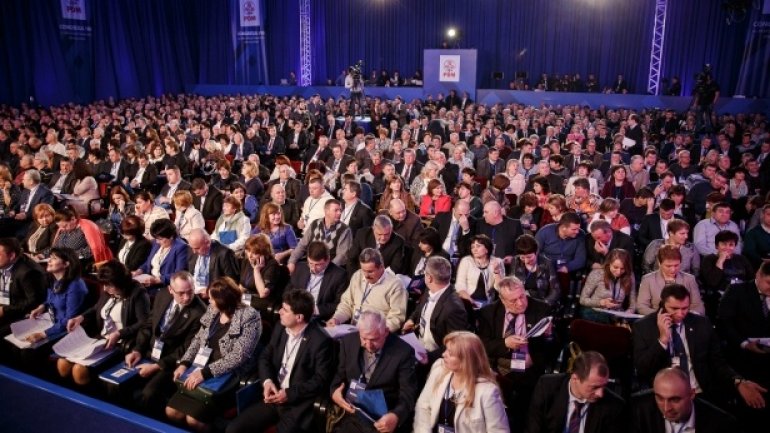 Democratic Party convened today at the eighth congress of the party. During the debate, several party leaders spoke and presented their vision about the role and future of the party on the political scene.

Parliament speaker Andrian Candu pointed out that the Democratic Party has demonstrated performance in government reforms undertaken in front of the citizens of the country and foreign partners. Speaker Andrian Candu has shown that it is the national interest for Moldova to continue towards the European Union. He declared his optimism about the future of the Democratic Party, which he considers "guarantor of the state modernization" and the party that can oppose any attempts to destabilize the country.

The prime minister, Pavel Filip, focused his speech on government activity. Pavel Filip insisted in his message on the success of the government to improve relations with development partners, Moldova gaining significant amounts as loans and grants. Prime Minister Pavel Filip has reviewed a number of measures taken by the government towards the citizens and the economic environment, talking about Moldova's economic growth this year, compliance with the Road Map towards the EU, strengthening the banking system, improving the functioning of Customs and Tax Service, pensions reform. He said that PDM has today most public positions in the party's history, urging Democrats to use them "to modernize our country and do good to people." In the end of his speech, Prime Minister Pavel Filip announced the granting Order of the Republic to former Romanian premier Victor Ponta "for special merits in the development and deepening of economic and cultural-historical relations between Romania and Moldova", a distinction that has transmitted to him on the stage of Congress.

President of Organization of Democratic Women, Valentina Buliga, spoke about the party's concern for women's issues in Moldova and the important contribution brought by democratic women at the strengthening of PDM. She thanked Marian Lupu for the way he led the party and urged Democrats to be more present on the territory, to listen "more carefully the voices of citizens", their wishes and proposals.

Speaking on behalf of local democratic officials, mayor of Hancesti, Alexandru Botnari, supported the PDM involvement in administrative reform and decentralization  process, and strengthening of local autonomy through the legislation promoted in Parliament. Mayor Alexandru Botnari noted the PDM force, "which was always a step ahead." Alexander Botnari also advocated for positive change of Moldova, demanding every democrat to take as much from this agenda of changes.

Alexandru Cauia, leader of Young Democrats, told delegates at the congress that the party's youth organization was strengthened today as "the best structured and largest political youth organization in Moldova". He thanked the party for supporting youth activities and engaged on behalf of Young Democrats to continue to work to increase youth political activism and promote ideas of national pride and solidarity generation.

Honorary PDM President Dumitru Diacov conveyed the closing message at this section. He said that the party's mission for the future is to meet people's wishes. "When you are part of a party responsible for things that occur in the country, you should know very well what to do. From this point of view, the Congress is a very important step. We must realize what is the Democratic Party, how he will look further. We need to maintain our mission to bring peace, tranquility and understanding in society " concluded Dumitru Diacov.