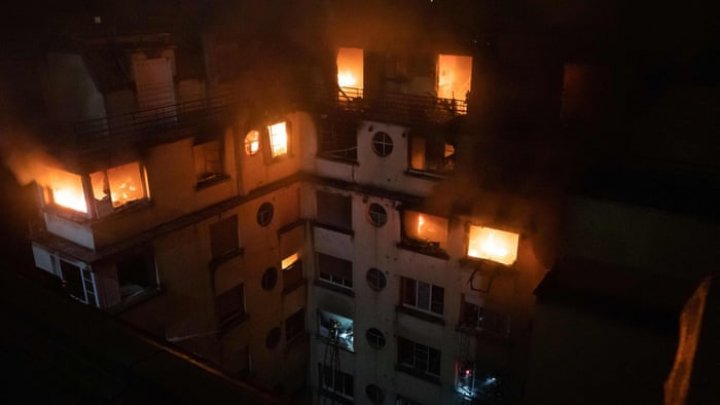 Police have arrested a woman suspected of starting a fire that swept through an eight-storey apartment building in Paris, killing at least eight people and injuring 30 others, including six firefighters, writes The Guardian.

The woman, who lived in the building, was taken into custody as flames swept rapidly through the block in the French capital’s 16th arrondissement, not far from the Parc des Princes stadium, home to the Paris Saint-Germain club.

The Paris prosecutor, Rémy Heitz, said a criminal investigation had been opened. “A person, a woman, who lived in the building has been arrested,” Heitz said. He did not confirm reports that residents had heard the suspect involved in a dispute with neighbours.

“At this stage, with what we know, the incident appears to be criminal … this person was arrested in the night not far from the fire … she is in custody,” Heitz added.

The fire was reported at about 1am on Tuesday and spread quickly from the second floor, where it is believed to have started. About 50 people were thought to be in the building at the time, many of them trapped. Some scrambled on to the roof to escape the smoke and flames, while others shouted for help from windows.

It took about 250 firefighters almost five hours to bring the fire under control.

“It was a particularly violent fire,” Capt Clement Cognon of the Paris fire service told BFM TV. “The fire has damaged the structure of the building and until we can check, we can’t rule out the risk of it collapsing,” he added.

Cognon said the death toll might rise. “We haven’t been able to get into the top floors of the building where the fire was fiercest,” he said.

Emmanuel Grégoire, an official with the city government, said the victims were residents. The fire began on the upper floors and spread to other parts of the building, he added.

The Paris mayor, Anne Hidalgo, said on Twitter that the city was in mourning after the incident. The fire comes less than a month after a gas blast in central Paris killed four people.

The area, one of Paris’s more chic districts, is popular with tourists. Nearby landmarks include the Trocadero, overlooking the Eiffel Tower, and a number of upmarket shops and restaurants.

By about 3.30am on Tuesday, fire crews had finished evacuating the block on Rue Erlanger but were still fighting the flames. Several surrounding buildings were also evacuated.

Julien Denormandie, the housing minister, said firefighters’ efforts in reaching the blaze had been hampered as the affected building was inside a small internal courtyard. He said there was no suggestion the apartment block was run down or needed repairs.

Michel Delpuech, the Paris police chief, said because the building could not be accessed directly from the street, fire crews had to carry ladders into the courtyard and set them up by hand.