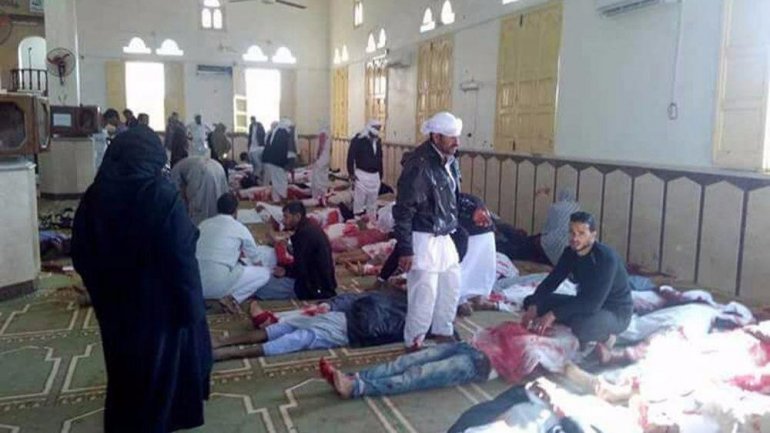 foto: People sit near the bodies of worshipers killed in an attack on an Egyptian mosque near the Sinai Peninsula town of Arish. (STR/EPA-EFE/REX/Shutterstock)
AFLĂ imediat Știrile Publika.MD. Intră pe Telegram

At least 235 people were killed and another 109 injured in an attack on a mosque in Egypt's North Sinai region on Friday, Egyptian state-run Nile TV reported, making it one of the deadliest attacks ever carried out against civilians in the province.

After at least two explosions, gunmen who were waiting outside the mosque opened fire at worshipers as they fled Friday prayers, state-owned Ahram Online said.
The attack targeted Al Rawdah mosque, situated in the village of Al Rawdah between Bir Al-Abed and the city of Al-Arish.

Pictures from the scene show rows of bloodied victims inside the mosque. At least 130 people were wounded, reports say.
The gunmen had set up "ambush" locations and opened fire on ambulances as they were transporting wounded worshipers from al-Rawdah toward al-Arish before the arrival of security services, eyewitnesses reported.
Speaking to state-run Masriya TV station, Egyptian health ministry spokesman Khalid Mujahid described the incident as a "terrorist attack."
Egyptian President Abdel Fatah el-Sisi is meeting with a security committee to discuss repercussions of the attack, Masriya TV reported. The presidency has declared three days of national mourning.

Locals are also quoted as saying that followers of Sufism, or Islamic mysticism, regularly gathered at the mosque.

Some jihadist groups, including so-called Islamic State (IS), see Sufis as heretics.