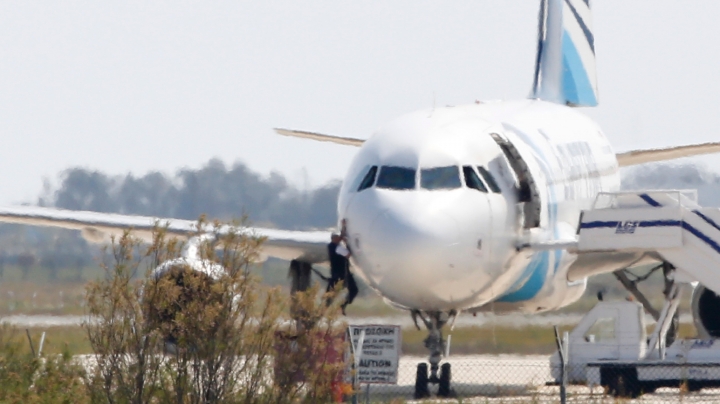 Some seats and aircraft parts. Personal belongings, including suitcases. And what's described as body parts.

That's what EgyptAir and Greek officials say searchers have found so far in the effort to locate EgyptAir Flight 804, which is believed to have crashed early Thursday into the Mediterranean Sea while flying from Paris to Cairo.
Greek Defense Minister Panos Kammenos relayed the Egyptian discovery of the body part, seats and suitcases at a news conference Friday, citing Egyptian officials. Later, the airline issued a statement saying more remains, personal belongings and aircraft seats had been discovered.
Those announcements followed one from the Egyptian military, which said it had found parts of the aircraft and passenger belongings about 290 kilometers (180 miles) north of the coastal city of Alexandria, Egypt.
"The searching, sweeping and the retrieval process is underway," Egyptian military spokesman Brig. Gen. Mohammad Samir said.
Kammenos also said it appears that aircraft crews participating in the search "have located further findings in a different location."
"But we do not have as yet an official announcement if these findings do have to do with the particular aircraft," he said.
The plane was carrying 56 passengers and 10 crew members and security when it left Charles de Gaulle Airport in Paris late Wednesday night.
AFLĂ imediat Știrile Publika.MD. Intră pe Telegram