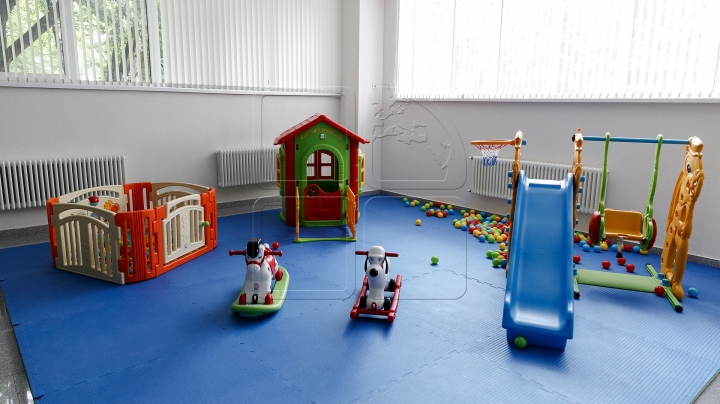 The Moldova’s Rebirth campaign is reaching its end. The Edelweiss Foundation has surprised the patients of the Mother and Child Institute from Chisinau by opening a playground in the hall of the building.

The Foundation – whose founder is Vladimir Plahotniuc – has accomplished its project of renovating dozens of rooms and of installing modern equipment, so now the mothers-to-be are more confident to step into the birth compound of the maternity.

There are special chutes and cradles, as the surface is soft enough for little kids to fall.

"On the International Children’s Day, we decided stay together with the Mother and Child Institute, it’s our spiritual project, as the inauguration will be soon. Our today’s surprise is the playground that the Edelweiss Foundation offers as a present to the mothers and children attending this institute," said Edelweiss manager Lara Moraru.

Neli Revenco, the Institute deputy manager, says the playground has been set up in accordance with recommendations of international bodies and of the World Health Organization.

"The hospital must be the child’s friend. These surfaces with toys will make the children’s stay here more pleasant so that they should overcome their fear," she said.

"It’s a good idea, well-done, may they make more good and nice things."

"It’s a good idea for the kids, on their Children’s Day. It’s nice to know someone thinks about us and our children."

"The refurbishment and everything is very good"

"It’s a very good idea. I’m going to become a grandmother soon, so the playground will be fine."

"I’d like to thank a lot the Edelweiss Foundation for the present it has made to our little patients. It’s a nice, kind and spiritual donation," said Mother and Child Institute manager Sergiu Gladun.

The renovation of the Institute is drawing to and end. All the repair works and the technical endowment have been financed from money collected during the Moldova's Rebirth campaign launched and unfolded by the Edelweiss Foundation.